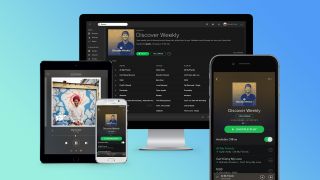 Spotify has announced it's snapped up two new companies, Cord Project and Soundwave, giving the streaming giant some new weapons in its arsenal – and potentially hinting at the future of the music service.

Spotify says its new acquisitions will join its product development organisation, and it sounds like both will continue to support their existing apps – but what exactly are they bringing to the table for Spotify?

Cord Project, founded in 2014, is the company behind voice messaging app Cord app, which enables users to record and exchange short voice clips – it's essentially WhatsApp, but with audio.

Meanwhile, Soundwave is responsible for the Soundwave social app, which enables users to chat about music and share tunes with one another.

So what could all of this mean for the future of Spotify? Let's speculate.

Spotify has made strides to make its service more sociable: the Follow feature lets you see what friends are listening to, and it's pretty easy to share your custom-made playlists with others. But maybe Spotify is interested in better ways of sharing the music love – Soundwave could play a big role here.

Embedding some type of instant messenger like Soundwave's would be the next step up from Spotify's current email-esque messaging service. Or, if not a messaging service, perhaps something akin to SoundCloud's 'timed comments'.

We can also imagine Spotify building some sort of community system akin to Soundwave's, so fans of Christian gangsta rap can find other like-minded listeners. This could also play into Spotify's Concerts feature, which currently displays upcoming gigs by artists you like.

This is where the Cord Project might play its part. We can't see any benefit to Spotify in users sending voice messages to one another, but the technology could have other interesting applications.

For example, rather than sharing an entire track with a friend, perhaps Spotify would enable us to cut a short clip of our choice.

Or – and remember, this is all just speculation – Spotify might be interested in a Shazam-type tool. The benefit of Shazam, the app which listens to and identifies tracks, is how instant it is. It's also most useful on mobile (which makes sense – you're more likely to hear an unknown new song when you're out and about) and we can't see how Spotify could offer something that's as simple and instant as Shazam.

But it's an incredibly popular app, and Spotify may already be thinking of ways it could bring it into its own service; right now you can click through to Spotify once Shazam has identified your song, but it's competing with other services such as Apple Music.

Finally, Soundwave has a music map, which enables users to pinpoint locations and discover the songs that have been listened to most recently in that spot.

It's a neat little feature, and we can definitely see Spotify doing something interesting with geolocations, be it a map or a feature that simply shows you what people in the local area are listening to.

Okay, we're done speculating. If you've got any guesses as to what we might see in Spotify's future – or anything you'd like to see – let us know below.