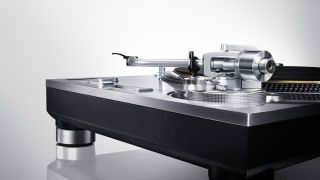 It teased us about it last year, but Panasonic has now fully unveiled its new Technics turntable.

Vinyl is back, and Panasonic is riding this retro wave with a new version of its classic turntable, named the SL-1200G, following the revival of Technics in 2014.

Panasonic said in a statement that "an ever increasing consumer interest in vinyl records has prompted the launch of " of the new system, the first 1200 system since production on the line terminated in 2010.

We're also promised silky smooth rotary control thanks to an encoder that detects the precise rotating angle. All in all, it will mean a better, cleaner sound unharmed by pesky vibrations.

We haven't got a price yet, but we don't expect it to be cheap; bear in mind that DJs are still the main market here.

The SL-1200G will actually come in a limited edition version (just 1,200 units), the SL-1200GAE, to mark the 50th anniversary of Technics, which will be available in the summer - with the standard version going on sale later in the year.