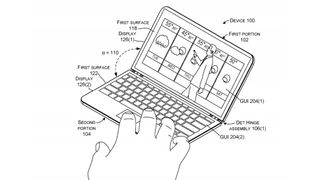 More evidence has come to light that Microsoft is planning some kind of dual-screen device, with another patent relating to such a piece of hardware having been spotted, hot on the heels of yesterday’s ‘video calling on hinged multi-screen device’ patent.

The fresh patent was also discovered by Windows Latest and was published by the Patent and Trademark Office over in the US last week, and it again illustrates a dual-screen folding mobile device, with both displays connected by a hinge.

The patent shows the device’s various modes of usage, including a ‘laptop’ mode whereby one screen becomes a virtual keyboard. If both screens are placed down flat, the interface – i.e. the operating system UI, web browser, or whatever software you happen to be using – will expand to fill both displays, and the resolution can be increased appropriately.

Just like a hybrid notebook, this product would also be deployable in a ‘tent’ mode for watching videos and the like, and the patent actually cites an example whereby the device would display the time and act as an alarm clock (with both screens showing the time, so as to potentially be visible from more points around the room).

And of course the hardware can be folded up (closed) to a very compact size for portability. Obviously the hinge would be designed to be sturdy enough to maintain the position of the device when in laptop or tent mode, so the hardware wouldn’t be prone to toppling over when used in either of those fashions.

As ever, we must bear in mind that patents aren’t necessarily filed with the expectation that such a device will eventually exist – these are often rather speculative things, and projects are often abandoned.

And the latest buzz on the grapevine concerning Microsoft’s rumored dual-screen Andromeda device is that it isn’t in the pipeline for the near future by any means, and there’s still a good deal of work to do on both the hardware and software front.

It seems the company wants to get this piece of hardware right before putting it in front of the public, which is certainly understandable. Microsoft has made many serious mistakes in the mobile phone arena, so it makes sense that the firm would want to get its crack at a supposedly new category of mobile computer (or ‘pocketable’ PC, as has also been previously rumored) spot-on.

We certainly keep hearing plenty about a dual-screen device, and as we mentioned at the outset, we reported yesterday on another patent on such a product designed for video calls and to better facilitate three-way conversations (using the device for two people, having a screen and camera each, with a third person on a remote PC).