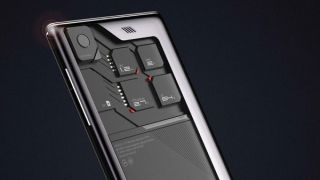 Aren’t concept phones great? They present sci-fi visions of what phones might look like in the future, or just ideas that are too weird or pricey to currently catch on.

What’s not so great is when these phones never make it past the concept stage. We’re talking about the handsets that are so far ahead of their time, or so different to the norm, that they haven’t become real, commercially viable devices.

It’s a shame, as these are often the most interesting of all the concepts. Not just packing in more power or smaller bezels, but doing something genuinely new. The following five all fall into that category, but don’t seem any closer to happening now than they did when they were first dreamt up.

Created way back in 2008, the Nokia Morph concept is still one of the most ambitious and futuristic smartphone concepts around.

Designed to show the potential applications of nanotechnology, this phone (which never existed in any real form) would have been able to fold and stretch into various different shapes and sizes, changing from phone to tablet size, wrapping around your wrist, or gripping your ear like a Bluetooth headset.

It could also turn transparent, harvest solar energy to stay powered, repel dirt and have a haptic surface, giving things on the screen the sense of a real shape and texture.

At the time, Nokia believed certain features of the Morph might be found in high-end handsets by 2015. That hasn’t panned out, but we may soon see foldable phones, such as the Samsung Galaxy X, which would at least be a start.

Here’s a real oddity, and something we don’t imagine we’ll ever see, as it’s at once futuristic and retro.

The Ply concept phone is basically the Swiss Army knife of phones, with numerous different sections that can be expanded, opened or pulled out.

There’s a gamepad, a dial pad, a projector and even a printer built into it, making for a predictably chunky and somewhat ugly device, but one we’d love to play around with if only it existed.

There are other phones with built-in projectors, such as the Lenovo Smart Cast, and gamepads, such as the Nokia N-Gage, but never both at once, and certainly never with a printer included too. And there probably never will be.

The Philips Fluid is a relatively conventional vision of a flexible phone, though it sees a handset turn into a bracelet, where many concepts and patents envision a smartphone/tablet hybrid.

Phones like the Fluid are therefore probably further from happening, especially as folding a phone out into a tablet could be achieved with a hinge, or just part of the display being flexible, while rolling it into a bracelet requires a fully flexible screen.

As there are no commercially available folding phones of any kind yet this doesn’t seem much closer to happening than it did back in 2010, when the Philips Fluid concept was created.

But if Samsung or LG launch folding phones this year, as is rumored, then the Fluid might not look quite so futuristic by 2018.

A different take on flexible phones, the Mobile Script comes with two screens. One of which isn’t flexible, and is used when you just want a phone-sized device, the other of which is pulled out from within, stretching to 9.5 inches and giving you a tablet-sized screen.

It uses a soft nano material, that becomes rigid when electricity passes through it, so it can both be rolled up for storage, and solid when in use.

The Mobile Script also has another, less visible trick, as the candy-bar shaped part is also covered in a nano material, which essentially works like a high-powered solar panel, keeping the phone juiced up indefinitely.

Although not quite as far-fetched as the Nokia Morph, we’re still a long way off seeing anything like the Mobile Script, particularly when it comes to charging skills.

The ZTE Eco-Mobius was ZTE’s vision for what might be possible with a modular phone, with users able to change the screen, chipset, battery, camera and RAM, essentially meaning you could buy a cheap basic version and then gradually upgrade the parts when you had the money.

It would also theoretically mean you’d never need to buy a completely new phone, instead just upgrading the modules when higher spec versions were made available.

Although the Eco-Mobius existed as a physical device, it was never intended to be more than a concept, and the first truly modular handset still feels a long way off.

Project Ara promised it but has been scrapped. The closest we’ve come with a commercially available device is the likes of the LG G5 and Moto Z, which let you add new features through modules, but not change the core components.