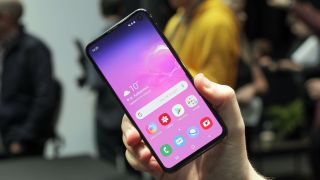 The Samsung Galaxy S10e (above) could have competition from the S10 Lite (Image credit: Future)

Following numerous leaks, one of the last and biggest remaining questions we had about the Samsung Galaxy S10 Lite and Samsung Galaxy Note 10 Lite was how much they might cost, and now we have an idea.

Now, it’s worth taking this with a serious side of salt, as those prices could easily just be placeholders, and even if they are real, it won’t be an exact conversion from euros to other currencies.

The listings (which were originally spotted by GalaxyClub) appear to have been removed though, which does suggest they might have been real prices – just ones that weren’t supposed to be up yet.

Lite in name only

Costing a similar amount to the standard S10 wouldn’t necessarily make the Galaxy S10 Lite an unappealing prospect though, because leaks suggest it has a bigger 6.7-inch screen and a larger 4,500mAh battery, along with the same high-end Snapdragon 855 chipset and a triple-lens camera.

We should know for sure soon, especially if this December 27 release date is accurate, though note that another source suggests the S10 Lite and Note 10 Lite won’t land until January – at least in India.