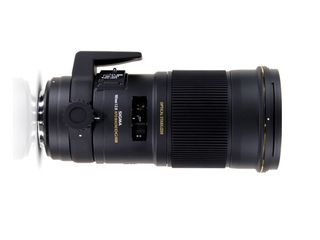 Sigma has revealed its APO Macro 180mm f/2.8 EX DG OS HSM lens, which is the first macro lens of this length to feature 1:1 reproduction with an f/2.8 maximum aperture.

The lens is a successor to Sigma's f/3.5 macro lens, and now boasts the company's own Optical Stabiliser technology and a wide f/2.8 aperture to allow faster shutter speeds. The OS feature offers the use of shutter speeds approximately four stops slower than would normally be possible, which in turns enables handheld close-up photography.

A further feature is the Super Multi-Layer Coating feature, which helps to reduce flare and ghosting while also delivering sharp and high contrast images, even when shooting at maximum aperture.

Sigma's Hyper Sonic Motor (HSM) has also been incorporated for fast and high-speed autofocus. Full-time manual focus capability is also available. A rounded nine-blade diaphragm helps to create an attractive blur to out of focus areas.

At 1:1 magnification, the lens has a focusing distance of 18.5 inches, which is a greater working distance of shorter focal length macro lenses, which should be particularly appealing to photographers shooting sensitive subjects such as butterflies.