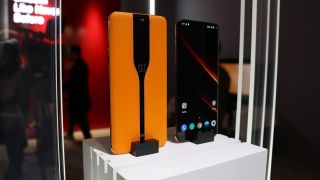 The new OnePlus Concept One phone has made waves at CES 2020 for one reason: the disappearing camera that makes the sensors appear and disappear when the camera activates.

While it's cool to look at as a potential phone, it's hard to understand why OnePlus would make a big deal about new tech that wouldn't be launched to the public.

Eric Gass, director of global brand partnerships at OnePlus, said the electrochromic glass (EC glass) experiment was always meant to be a concept, as the brand looked to solve the issue of smartphone sensors being large and prominent, ruining the clean aesthetic of some device designs.

But, while the EC glass project was initially developed purely as concept, Gass told us there's a possibility that it could come to commercially-launched OnePlus phones in the future.

"In terms of when we'll see it made available, our R&D department will continue perfecting the technology – in terms of bringing it to production, we don't have any dates just yet," Gass confirmed.

18 months in the making

It would make sense for OnePlus to want to use the technology in future handsets – after all, the brand spent 18 months developing the right kind of EC glass to function well enough to be used in a phone.

OnePlus had to create glass that was thin enough to let the light through, but thick enough to be robust – as well as being able to change state from opaque to transparent as quickly as the camera app could open. This meant bringing the speed down from four or five seconds to just 0.7 seconds, as well as making the glass only 0.05mm thick.

While those feel like boast-worthy specs from OnePlus, the level of engineering that’s gone into the technology means it will surely be brought to consumer devices if the cost and power consumption can be brought down to acceptable levels.

One side benefit of the EC glass is that a neutral density filter is baked into the glass. These filters are used in photography to alter the wavelength of light, and OnePlus was extolling the virtues of using the opacity-changing glass to allow you to improve smartphone photography, bringing improvements in high-brightness scenes – and OnePlus confirmed that it’s looking at this capability as a future feature to develop for smartphone cameras.

In terms of the EC glass being brought to a consumer device, there’s also an issue with smartphone camera sensors themselves – these already need to be quite thick in order to offer the necessary performance, and that’s led to the camera bump OnePlus is trying to eradicate.

With that in mind, it’s hard to believe that the OnePlus Concept One phone has industry-leading camera sensors packed in.