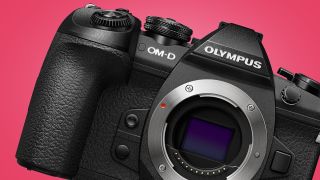 The incoming Olympus OM-D E-M1 Mark III appears to have not just leaked but gushed from the secret cameras reservoir, with a range of images and specs giving us a pretty clear picture of what we can expect from the unannounced Micro Four Thirds snapper.

Alongside four images of the OM-D E-M1 Mark II successor, 43 Rumors has published what it claims is a press release for the camera – all of which suggests that that the E-M1 Mark III could just be our new favorite Micro Four Thirds camera.

While the design doesn't appear to have changed much, it looks like the E-M1 Mark III will bring a new processor, improved image stabilization (up to 7.5 stops of compensation), and a new 'multi selector' joystick.

None of those features would be revolutionary on their own, but it'd represent a strong upgrade on the E-M1 Mark II, a camera we called "the best Micro Four Thirds camera yet". That camera has since been overshadowed by the newer Olympus E-M1X, though that pro-level beast didn't quite justify its hefty premium, in our eyes.

What's exciting about the E-M1 Mark III rumors, if true, is that it appears to combine many of the E-M1X's impressive software features in a body that is much smaller, thanks to the lack of a built-in battery grip.

While it might be disappointing that the E-M1X Mark III appears to have retained the same 20.4MP sensor as its predecessor – which is now over three years old – the rumors suggest the camera will inherit some great new software features, including the 50MP Handheld High Res Shot, improved Face and Eye Priority AF, and Starry Sky AF.

That 50MP handheld mode, in particular, helps to get around the limitations of the 20MP sensor by leaning on Olympus' superb in body 5-axis image stabilization, which remains the best we've tested.

The 43 Rumors leak also suggests the camera will have the same 121-point, all cross-type Phase Detection AF as its predecessor, along with slightly boosted 18fps burst shooting powers (with AF/AE tracking). Video shooting will also apparently get a minor boost thanks to the inclusion of the flat OM-Log400 profile to allow for grading in post-production, if that's your thing.

The leak doesn't quite reveal the camera's full specs – we still don't know if the EVF, screen or ISO performance are going to be improved – but it does seem to give us a good idea of what to expect. And that is a camera that could well be the sweet spot for those who enjoy the handheld versatility and tactile fun that have always been the OM-D series' hallmark.

According to the latest rumors, the Olympus E-M1 Mark III is scheduled to be announced in mid-February, ahead of its unveiling at the CP+ Camera and Photo Imaging Show, which starts on February 27. But we'll bring you any official news from Olympus as soon as we get it.