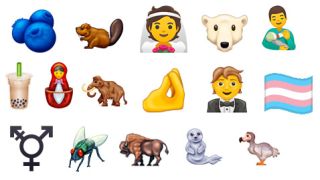 Some of the new emoji for 2020 (Image credit: Unicode Consortium)

The listing of new emoji for 2020 has been announced, and there are some pretty great choices as part of the selection – as well as some rather bizarre ones.

You can find the full list here, from the Unicode Consortium which chooses the new emoji each year. We'll run you through some of the highlights, but there are a grand total of 65 (117 if you include the different skin-tone versions of the same emoji), so we'll just stick to the highlights.

There's a clear continued push towards diversity in the 2020 emoji, and the highlights are the transgender flag and symbol, and while the former is already available in certain operating systems, it shows the greater push towards inclusivity.

This is echoed in newer versions of older emoji, with men in wedding dresses, women in tuxedos, men and women feeding babies, and gender neutral versions of some of the above.

Other new emoji include certain extinct animals, like a dodo and a mammoth, and other animals include bison, polar bears and seals (none of which are extinct as of writing in early 2020).

We've also got quite a few insects here, like the beetle, cockroach, fly and worm, so the entomophobic among you might not appreciate all the new additions.

There's a smattering of other icons as part of the new wave of emoji too, such as a general 'hug' icon, gravestone, a collection of DIY tools, an accordion, a sandal, a pinata, a magic wand, and Matryoshka dolls.

When will I get the new emoji?

Just because the list of new emojis has been unveiled, doesn't mean you'll get them on your phone just yet. This list comes from Unicode, the group that creates the base designs for emojis that companies then use.

Apple and Google will design their own versions of each of these emoji before you can actually use them. This lets them keep their own aesthetic style while keeping in line with emojis that can be sent between all devices. For an idea of how similar or different the emoji may end up looking, check our coverage of the 2019 emoji on iOS and Android.

Unicode suggests the new emoji could roll out in September or October, although in 2019 they were launched in July by Apple and Google (on the same day, no less). Now, the race is on for both companies to try and get the emoji on their platform first.

It's worth pointing out that it's possible (but not likely) a platform might not get all these emoji, but that would only be in rare circumstances.