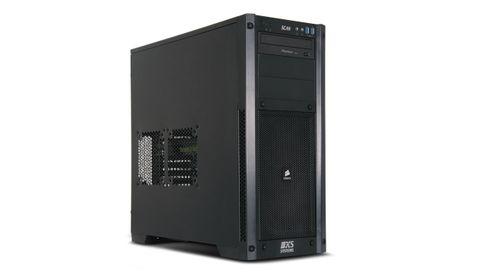 System builder, and tech retail guru, Scan, has been the first out of the blocks to bring us a machine specced out with the excellent Nvidia GTX 680. This then is that machine, the Scan 3XS Performance GTX.

And it's a very sensible machine. All clean lines, rectangular and black.

Now if that doesn't excite you we can completely sympathise; looking at it you wouldn't think it the gaming powerhouse it really is.

The reason it's such a sensible machine is completely down to the fact that it's been designed 100% with its focus on PC gaming. And we can't help but applaud that.

You wont find any gaudy flashing LEDs or cold cathode tubes in this build, you wont see a pointless Blu-Ray drive sitting, mostly redundant in the 5.25in bay and you definitely wont find an unnecessarily feature-bloated motherboard designed for the LN2 crowd and the trickle-down effect.

All you're going to find in this build are the components hand-picked to ensure the highest frame rates the machine can manage.

This is a pure-bred games machine. That's our kind of sensible.

The slightly higher CPU overclock in the Chillblast machine means that it has the edge in the CPU intensive Cinebench test, but only by a tiny margin.

The difference in graphics performance though is much greater. The Nvidia GTX 680 is the fastest GPU out there in the wild and is our choice for a serious gaming PC.

That said there are occasions where the AMD Radeon HD 7970 of the Chillblast Fusion Marine takes a lead though and that's in the system-taxing Metro 2033.

Elsewhere though it's the Scan rig all the way.