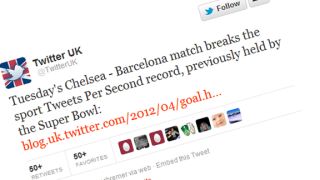 So long and thanks for all the tweets

Football/football – Football has finally taken on football and won. That is, proper football has beaten American football, if we're judging the calibre of each sport by the number of fevered tweets high profile matches garner. This week's Chelsea v Barcelona Champions League semi-final saw 13,684 tweets per second when that chap Torres kicked a ball into a net. That's more than the previous record of 12,233 TPS during the US Super Bowl back in February when some men did some, er, stuff. We're really not too clear on how American football works. [Twitter]

Ek-cellent – Spotify's Daniel Ek has stormed into the Sunday Times Rich List musical top ten with an estimated £190 million fortune. Lend us a fiver, will you Daniel? [TNW]

Notwork – Friendster's story begins back in nineteen-dickety-two, somewhere between Friends Reunited and MySpace. It was a social network, just like MySpace was. Now Friendster has relaunched as a gaming site, just like MySpace is now a music site. Facebook (probably would've) commented, "Whatevs." [Forbes]

Kids these days – A survey in Germany reckons 14 to 16 year olds there would rather go a week without television, alcohol or sex than a week without their phones. Sure, yeah. Make a film about that, Hollywood. [Fudzilla]

Braveheart – Dolby's new Atmos sound system will debut in new Pixar's upcoming animation Brave. Atmos is like sound 3D, requiring new speakers to be installed in cinema ceilings so noises can be positioned more precisely. It'll cost theatres about $30,000 (£18,600ish) to fit it – so how much will it add to the cost of cinema tickets, we wonder? Ahh, it's not like nineteen-dickety-two, when ticks to the flicks cost tuppence and there was no sound save for old Bill on his washboard. He wouldn't stand for being suspended from the ceiling; we'll tell you that for nothing. [BBC]

Bookworm – Another day, another browser update. This time it's the turn of Opera 12, which has gone into beta with the laudable intention of making the internet look more like a book. Check out Opera Reader here – of course there are other updates too: HTML 5 drag and drop, load times, 64-bit versions, yada yada. You can download the beta here. [Opera]

Appy day – The Apple Design Award nominations are now open so if you've seen an app that embodies all Apple's favourite qualities (magical, amazing, outlandishly attractive) then you can nominate it via this page. Just make sure it's on iOS or Mac, yeah? Android-based submissions will not be received kindly. [Apple]

Learning is fun – James May, who has been on Top Gear and therefore knows a thing or two about, er, science, stars in a new augmented reality app to explain nine of the Science Museum's most interesting exhibits. The James May Science Stories app will cost you £1.99 for iOS and Android courtesy of Qualcomm and DigiCave. Happily, entry to the Science Museum is free. [PR]