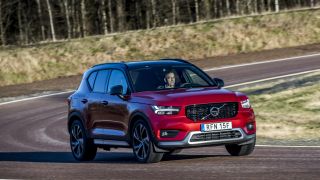 Volvo has never been cooler than right now. As a company, it appears to be in great shape and turning a profit. There are some great cars in the current model range with more to come plus big plans for electrification and, yes, even more safety features. Volvo has also pledged to end road deaths in any of its cars this year, so 2020 is a big deal, and the imminent arrival of the new all-electric XC40 Recharge SUV is getting the ball rolling.

TechRadar visited Volvo Cars HQ recently, on the outskirts of Gothenburg and there was plenty to see. As you’d expect, there was much about safety, and quite a lot about electrification, but there was also the sort of Scandinavian quirkiness that makes the Swedish brand so appealing to many car buyers. Where else, for example, would you find a new car with an indicator sound derived from a twig breaking?

Jan Ivarsson, senior technical safety advisor, is something of a Volvo veteran having been with the company for over 35 years. Safety has, of course, always been a big part of the Volvo brand, but with electrification comes new challenges. It made the perfect place to start. Volvo, he told us, is pushing ahead with plans to make its electric cars safer than ever, despite the slightly different issues it presents them with.

Walking us around the rolling chassis of the XC40 Recharge, Ivarsson explained that Volvo has been making a transition from working with protective safety towards cars with more collision avoidance functionality.

In the future, the company also wants to do more to combat people driving under the influence of alcohol or drugs. That means the next generation of Volvo vehicles will have an advanced camera system installed to act as a countermeasure to unsafe driver behavior.

You could argue that anyone drunk or under the influence of drugs might not be able to question their own judgement on driving proficiency. Ivarsson, however, thinks Volvo can be the connection for getting help.

“We would like to support the driver in that type of situation,” he says. “If needed, we will put the car by the side of the road. We’ll support you all the way.”

While safety is a given with Volvo, is this going above and beyond what is expected from legislation? “Since this is a new generation of vehicle types, I think if you look at rulemaking then this is an ongoing process,” Ivarsson says.

However, Volvo has the advantage of historical data, which it has collated for many years from collisions involving its own vehicles. “We have done that since the 1970s,” adds Ivarsson. “I have a library of different kinds of crashes, from fender bender-type situations all the way up to really tough ones.”

And, crucially, 2020 is the year when Volvo has committed to having no road deaths occurring in any of its cars. “That is our vision,” Ivarsson adds. “We have had this since 2007. This is the vision for our engineers working with safety.”

The sound of the future

Later, Volvo staff presented us with an even deeper dive into their ambitious plans for making its electric cars safer for people, not only on the inside but on the outside too. After walking through a labyrinthine series of corridors we arrived at the Volvo sound lab, where the XC40 Recharge has been given its own aural identity both inside and out.

Interactive sound designer Fredrik Hagman and technical safety expert Mikael Ljung Aust showed us around the facility and demonstrated their new ‘sound’. Recent legislation requires manufacturers to ensure their electric and hybrid cars emit a noise when they move, both going forwards and also when reversing. But the process of developing the right warning isn’t as straightforward as you might think.

The sound, or Acoustic Vehicle Alerting System (AVAS), has been tailored by Volvo to fit into its overall ethos. “There is a fear that electric vehicles, especially at low speeds, don’t make enough sound in order to be heard in a city environment. Hence the legislation,” Hagman explains.

There are some mild variations on the theme, but all three legislative requirements that cover the US, China and the EU require the sound to meet a certain level, frequency and pitch. “Overall the level is in the range between 40 and 60 decibels. The frequency must shift with the varying speed too,” Hagman says.

The test vehicle on show (an XC90) has got one speaker hidden under the front end of the car and another at the rear, in order to push the warning sound downwards and circulate it around the vehicle more efficiently.

The audible alert, meanwhile, has been produced with conventional studio software, which the team used to produce initial concepts. From that they tuned the sound to match different speed requirements.

Crucially, the next step was testing it out on users in the real world. “You can design it in the studio, but it's not until you get out and try it in the correct context that you get a vastly different appreciation of the sound,” Hagman says. “When you get rid of the combustion engine you get rid of the combustion engine noise, but there are still lots of other noises while driving an electric car. Tire noise for example.”

What has been produced is hard to pin down as we move outside for a real time demonstration. It’s a little like, as the engineers put it, a crescendo on a piano. It’s there, and you hear it, but you can’t quite put your finger on it.

For reversing, meanwhile, Volvo wanted to avoid the common-or-garden truck reversing sound that is unmistakable. Volvo has therefore come up with a neat variation on that theme, as it’s a rather lilting but totally noticeable tone that works a treat. It’s not so ‘trucky’, joke the audiologists.

With all the tech that’ll come with the new Volvo XC40 Recharge, including its unmistakable ‘sound’ the team have also stuck with the underlying earthy vibe often associated with the brand.

“We’ve approached the interior design with a more ecological approach,” says Hagman. “So, for the interior sound we designed it with a lot of organic thinking. For example, the turn indicator is actually a twig breaking, which has then been sampled.” This seems to align with Volvo’s  organic approach perfectly.

While we were visiting TechRadar also got a chance to have a test track session in the new Volvo XC40 Recharge Plug-in Hybrid T5. Granted, it was only a few laps but we got a good impression from the taster experience.

And, when the new all-electric Recharge SUV hits our roads in the coming months it’s good to know you’ll be able to hear it coming: albeit in the low-key and very organic way that Volvo does best. Listen carefully, and you may even hear a twig break…