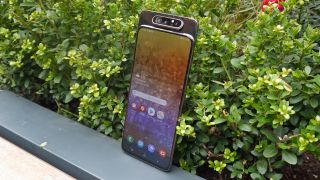 If you're looking for a deal on one of the more ubiquitous best smartphones, there are plenty around right now in the run-up to Black Friday; and if you want a phone that's a little different, to make you stand out from the crowd or just shake up your mobile experience, then there are some special deals just for you.

As part of its early Black Friday sales, Argos has cut the prices of loads of smartphones, including some of the more wacky and weird releases of the year.

These include the Nokia 9 PureView with its five rear cameras, the Samsung Galaxy A80 with its intriguing pop-up camera segment, and the Sony Xperia 10 with its peculiar aspect ratio.

Samsung Galaxy A80: at Argos | SIM-free | 128GB | £479
The Samsung Galaxy A80 has no front-facing camera; instead it has a pop-up section that spins around the rear cameras when you want to take a selfie. It's an novel solution to the selfie-cam problem, and is sure to make you the centre of selfie attention.
View Deal

Nokia 9 PureView: at Argos | SIM-free | 128GB | £349
The Nokia 9 PureView has not three, not four but a whopping five rear cameras, three of which are monochromatic and two which are RGB, and when you press the shutter button the device takes a picture with each and combines them.
View Deal

Sony Xperia 10: at Argos | SIM-free | 64GB | £199
In 2019 Sony starting releasing its phones in the novel 21:9 aspect ratio, in order to make them great devices to watch films on. This is the cheapest of its devices, now reduced even further, and while it's not perfect, it's pretty cheap for a mobile movie machine.
View Deal

If you're happy with a more conventional phone, Argos has also cut the prices of lots of other handsets.

We've picked our way through the list to find you some of the highlights, including the Honor 20 Pro and Samsung Galaxy A70, two of the best mid-rangers of the year, and the Samsung Galaxy S10, which tops our list of the best smartphones of 2019.

Honor 20 Pro: at Argos | SIM-free | 256GB | £450
The Honor 20 Pro was one of the best mid-range smartphones from 2019, and by cutting £100 off its asking price, Argos is making it a tempting buy. Sure, it's not as novel as some of the other devices reduced, but who needs something different if you've got something that's very good?
View Deal

Samsung Galaxy A70: at Argos | SIM-free | 128GB | £330
Samsung's Galaxy A phones were some of the most popular affordable phones of 2019, and the A70 is one of the top handsets in the range, with three rear cameras and a beautiful AMOLED display. It's also got an appropriately massive battery to see you through the day.
View Deal

Samsung Galaxy S10: at Argos | SIM-free | 128GB | £650
The Galaxy S10 tops our list of the best smartphones (along with its Plus-sized sibling), and it's pretty affordable too thanks to Black Friday price cuts. This deal is on the smallest storage option, but for many people that'll be enough.


If none of these offers piques your interest, feel free to browse the Argos mobile phones homepage to see if anything else there appeals to you.