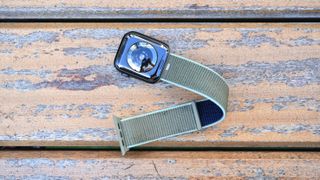 That's according to a newly-discovered patent, submitted in 2018 by Apple but published in November 2019, and discovered by Patently Apple. Judging by the filing date, we could see this tech in the Apple Watch 6, but more likely the Watch 7.

The new patent focuses on the Apple Watch band, and shows a series of electromyography (EMG) sensors in the band. EMG tech is used to monitor muscular activity by doctors, and its use in the Apple Watch would let the device check your strength, as well as grip intensity and how relaxed you are.

In other words, it could monitor your grip on a tennis racket or other sports equipment, which would be handy for people who do most of their activities through these kinds of sports. It's also likely to be useful for checking stress or relaxation through your body.

The patent also points to Face ID for the watch, which we've heard rumors of before. There's no indication of a camera on the body of the Apple Watch though, so for now this news seems more of a curiosity than a certainty.

EMG sensors aren't the smallest pieces of tech yet, and so a smartwatch band filled with them will likely be rather big – much bigger than the current comfortable straps you get with the device.

It's also highly unlikely that cotton bands will be an option if EMG sensors are in the strap, so we might be stuck with metal or silicone – bad news for people with skin conditions who often find cotton easier on the wrist.

However, we likely won't see this tech on an Apple Watch for a few years (if at all), in which time Apple might find a way to shrink the sensors to fit well into a watch band.

Of course, the existence of a patent is no confirmation that we'll see this tech in an Apple Watch at all, as patents only suggest a company is considering something, not that it's in any way likely.

We'll have a better idea come September 2020, when we're expecting to see the Apple Watch 6 launch alongside the new iPhone 12 and perhaps other things, but stick with TechRadar until then for all the newest Apple news and leaks.