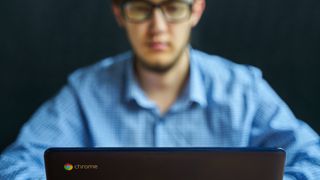 Welcome to our guide on how to screenshot on a Chromebook. Taking screengrabs is a basic function of any decent system and for traditional PCs it’s baked into the keyboard as part of the print screen key, but how do you take grabs with a Chromebook where no such key seems to exist?

Fear not Chromebook users, Google has indeed included full screengrab features if you know where to look. We’re going to take you through all the options for how to screenshot on a Chromebook: full screenshots, cropped grabs, window capture and what to do if you don’t have access to the keyboard at all. Plus how to capture off to the clipboard and how the Chromebook screenshots are stored.

1. How to screenshot on a Chromebook with the whole screen

The most common way to take a screenshot with a Chromebook is to grab the whole screen, and your Chromebook can do this easily enough by pressing the Ctrl + show windows key (this is the function key with the rectangle and two trailing lines, positioned between the full-screen and reduce brightness keys. If it was a traditional function key it would be F5).

Once you’ve pressed these keys, ChromeOS (the operating system Chromebooks run on) pops up a notification displaying the grab that has been taken.

This will stay visible for around 10 seconds before it clears itself. The automatic filename contains the date and time.

2. How to capture part of the screen

Chromebooks offer two more built-in screenshot modes: cropped to an area and the current window, though this last one isn’t a documented feature so we’re not sure how wide support is.

To grab a cropped area press Ctrl + Shift + show window keys. The mouse cursor will change to a crosshair, this enables you to draw a rectangle around the area you would like to capture.

We discovered you can also easily capture select windows by pressing the Ctrl + Alt+ show window keys. The next window you click on will be captured in a screenshot.

3. Other ways to screenshot on a Chromebook

Have a Chromebook that doesn't have those function keys? Don’t worry you can still capture screen grabs on ChromeOS tablets - this is done in a similar way to Android. Just press the power button and volume down keys at the same time.

If you don’t have this access to a keyboard or even the power button then you can take a grab via the Chrome browser menu by selecting Menu > More tools > Take screenshot.

Unfortunately there’s no option to crop or capture a window directly using this menu function.

4. How to screenshot on a Chromebook using the clipboard

If you’re used to how Windows 10 handles screen shots - that’s to say when you press the Print Screen key it’s copied directly to the clipboard rather than it being saved automatically - then you can mimic this behaviour with your Chromebook... to an extent.

When you take a screenshot on a Chromebook, take a close look at the notification that pops up showing the screengrab. At the bottom of this is a 'Copy to clipboard' button.

Click this and the grab is now available to paste into any documents you’re working on or for manipulating in any image editor you’re using.

5. Where to find your Chromebook screenshots

What if you’ve gone on a screen grab frenzy and stacked up a loads of Chromebook screenshots in a row and now want to go back and peruse them to root out all the bad ones and select the ones you want to keep? The short answer is that Chromebook screengrabs are stored in the Downloads folder as PNG files.

If you’re not sure how to find those tap the 'Search' button, type 'files', open the Files app and click 'Downloads' in the left-hand shortcut list.