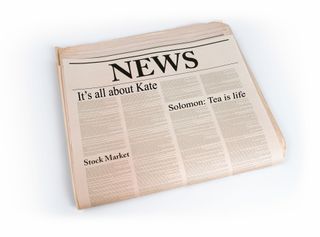 News for you, news for me

There's a new iPad in town, but bad luck: you'll never get your hands on it. That's because we're all going to die when the solar storm headed for Earth gets here. We reckon.

Other things you won't get to enjoy on the basis that today is the final day of existence: Topher Grace's Star Wars remix, the Pope's website, Mass Effect 3's classy Asda launch and correctly citing a tweet in an academic paper. Shame.

Game Over - It's fair to say we don't know much about solar storms, but we're pretty sure the one headed Earth's way today is going to bring about the falling of the sky and lead us through the valley of the shadow of death and basically cause the end of days. Or the magnetic storm will just disrupt power, sat navs and flight paths. But who are you going to believe? Us or NASA? [Metro]

Ah, the recut is strong with this one – Topher Grace, he of the acting in That 70s Show and as Venom in Spiderman, has recut the first three Star Wars episodes into one 85-minute prequel. Why? We don't know, but it can't be worse than The Phantom Menace. Keep an eye out for Star Wars: Episode III.5: The Editor Strikes Back if it tickles your fancy. [Slashfilm]

Hacked off hackers – Anonymous are still going, and they've hacked the Vatican's webside on the basis that its "doctrine, liturgy and absurd and anachronistic rules" are being spread around the world and interfering in Italian politics. But you already knew all this, because you check www.vatican.va daily, right? Don't worry, it's back now. [Reuters]

Decision time - Google's not about to let Bing just have all the Windows Phone search action. Although Bing (Bing!) is the default search engine, Google has just released a free Google Search app for Win Pho handsets, which includes autocomplete and voice search. Of course, we still favour Ask Jeeves, which is definitely still going. We checked. [Google]

Terra Netflix – Cancelled pre-historic drama Terra Nova might get a second wind as Netflix looks to bring it back after Fox declined to make a second series. The 'flix, as literally nobody calls it, has already revived the quite wonderful Arrested Development, and although the talks are in early days, things are looking up for people who have heard of and like Terra Nova. [Deadline]

Midnight feast – Mass Effect 3 is going on sale tonight and bargain hunting gamers can get it from Asda for £37.97 at one minute past midnight. Pick us up a sausage roll while you're there, will you? [PR]

Dubious academia – Every day we wonder how to officially cite tweets in academic writing, and now – at last – we know.

Amoon Bouche – Helen Sharman, the first Briton in space and therefore also the coolest Briton around, has devised a Space Banquet and not just because someone at the National Science and Engineering Week press office had some space/food puns lying around. It's also because domestic space flights are on the horizon, at which time we can enjoy Amoon Bouche (the strongest cheese ever made), Pot Roast A Pollo (a roast dinner in Pot Noodle form) and Martianmallows (marshmallows). [PR]

Supersonic space jump – You know who could use a Space Banquet? Probably not this guy who's going to skydive from the stratosphere, 120,000 feet up. The capsule from which he'll jump is now all ready to go ahead of the jump which will probably take place in August. From 23 miles in the air. Rather him than us. [Space.com]

Toe tappin' – Our Future compatriots at Tap! Magazine worked long and hard into the night to bring you this free iOS guide to the new iPad, complete with video and interactive images. So you can download it on your old iPad just before you sell it so you can get the New iPad. [Future]

Bonus tech video of the day: Speaking of the new iPad...