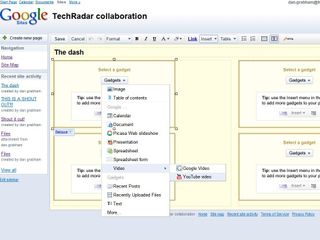 Google Sites in action. This is the dashboard, where you can embed whatever you like - perhaps a picture, doc or YouTube video

Google has launched its new Google Sites suite, an extension of Google Apps designed for online collaboration. But the launch has merely provoked derision from rivals, with one calling it “just a pretty wiki”.

It’s a bit more than that if you ask us though. The idea is that it’s a readily accessible place that people can access documents, calendaring and task lists. We’ve had a play with it and while it seems fairly limited in outlook, it does plug into Picassa images and enable you to embed relevant videos from YouTube in the Dashboard.

You can restrict editing to a group of your choosing, or anybody with an email address in the same domain as yours. The new offering goes up against Microsoft’s SharePoint service as well as – at a more basic level – Office Live.

"Creating a team website has always been too complicated, requiring dedicated hardware and software as well as programming skills," said Dave Girouard, vice president and general manager of enterprise, Google.

"Now with Google Sites, anyone can create an entirely customised site in minutes and invite others to contribute. We are literally adding an edit button to the web."

Hmm, that last comment is probably what led Alastair Mitchell, CEO at online collaboration and project management outfit Huddle.net, to point out that wikis already do that job pretty well. And naturally that Google Sites isn’t as sophisticated as a dedicated solution.

“So Google has finally recognised people need more than just online documents to work together – great! But I don’t think anyone who is this space already, including ourselves, should be peeing their pants yet.

"Google Sites may be badged as a business tool, but the fact is that it isn’t properly integrated with any of Google’s other apps.” What he means is that you can integrate, say, a calendar, but you can’t tie it together with tasks completed, for example. It’s all slightly disparate.

“Worryingly, it seems that Google took a good product like JotSpot and stripped out most of powerful functionality. Now it’s just a pretty wiki,” continued Mitchell. JotSpot is a Google-acquired company that enabled its users to create and manage project-based wikis. It also had some large customers such as Intel, Symantec and eBay.