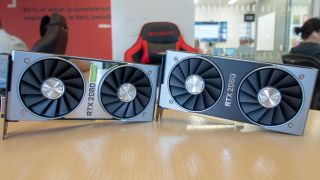 When it comes to picking up the best graphics card for your needs, there are a ton of options on the market – but many of them can break the bank if you want the latest and greatest. If you’re not that interested in bumping your rig up to the level of visual fidelity that 1440p-capable hardware can offer, however, you’ve got a menagerie of great picks at your disposal that you can opt for without emptying your coffers entirely.

Selecting the best can be tricky, so we’ve rounded up a few options to help you decide what's integral for the perfect build for you. Check out our list to find the card that’s perfect for you so you can get started building right away.

If you're looking for an AMD equivalent to the GTX 1660 Super, the RX 5600 XT is the card for you. AMD's GPUs have aimed towards the lower end of the market of the last few years, but Nvidia has continued to adapt. However, the RX 5600 XT, retailing for $279, manages to match, or even beat the RTX 2060 at a much lower price.

A significant disadvantage of the RX 5600 XT is an issue that has plagued AMD for over a decade: iffy drivers and VBIOS. The RX 5600 XT has already had VBIOS drama, and AMD's reputation for having unstable GPUs might turn some buyers off. But, if you're willing to take that risk, you'll be hard-pressed to find a card with a better performance-to-value ratio ar 1080p than the RX 5600 XT.

Enter into a ray traced world

SGD
$614.28
View at Amazon Singapore
Great 1080p performance
RTX On
May have to lower some settings

If you're looking to get ray tracing with your GPU purchase, the RTX 2060 offers the lowest price point in Nvidia's current lineup. For 1080p, the RTX 2060 can produce admirable results in titles that offer raytracing. However, you won't be hitting 60 fps in most titles with RTX on in every title without sacrificing texture quality or effects.

If you're looking to game exclusively in 1080p, the RTX 2060 is a good pick if you want to futureproof your purchase. It'll be an excellent card for upcoming games like Cyberpunk 2077 and provides an entry point if you ever decide to give 1440p gaming a try.

It's hard to believe you can get a GPU that can run 1080p at over 60 fps for $240, but the GTX 1660 Super can absolutely do it. Unfortunately, you may find that you have to go with medium or high settings instead of ultra in some games to reach past that 60 fps sweet spot with this card. However, at less than half the price of the RTX 2070 Super, the GTX 1660 Super is the card to go with if you're on a budget and don't intend to push past 1080p anytime soon.

While the card is terrific at 1080p gaming, the GTX 1660 Super falls short in its versatility. You could feasibly do some light 1440p gaming with this GPU, but it just doesn't have the power to perform well at higher resolutions. Again, if you plan to stick with 1080p for the foreseeable future, the GTX 1660 Super is a fantastic value. If you think you might want to upgrade to 1440p soon, the RTX 2060 Super or RTX 2070 Super is likely the better purchase.

For when you need to go overkill

Gaming at 144Hz or 240Hz is GPU intensive, even at 1080p. If you're looking to get triple-digit frames while gaming, but don't want to compromise on fidelity, you'll need a powerful GPU. With an MSRP of $499, the RTX 2070 Super represents the best value you can get if you have a 1080p monitor capable of high framerates.

While an RTX 2080 Super or RTX 2080 Ti can squeeze even more frames from games at ultra settings, the extra money for those cards isn't really worth it if you're gaming at 1080p. With the RTX 2070 Super, you shouldn't have too much trouble hitting 144 fps in games like Overwatch and CS:GO. Most other titles won't dip under 100 fps at 1080p with this card, making it a beast for gaming at this resolution.

Entry level, but worth it

SGD
$349.75
View at Amazon Singapore
Solid performance
Super affordable
Not the fastest on the block

The RX 5500 XT gives decent 1080p performance at a ludicrously low price. There are two versions of this card, one with 4GB of VRAM at $169 and one with 8GB of VRAM at $199. The more VRAM, the better, of course, but if you're looking at a budget card like this, it's good to have the option to save even more money. Before you purchase, realize that 4GB of VRAM is at the extreme low end of what you'll want for modern gaming.

The RX 5500 XT is mind-blowing only for its low price. This card can play many games at 1080p/60fps, but it'll struggle with ultra settings on demanding titles. However, this card is an excellent introduction to PC gaming for those who don't want to get into four-figures to build their rig - especially if you’re into esports titles like Overwatch or Fortnite.