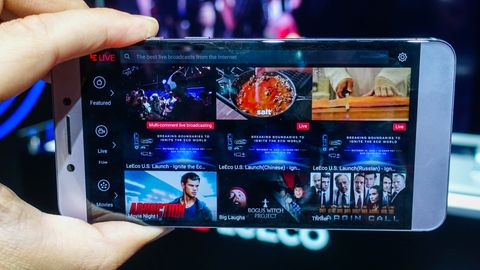 LeEco Le Pro 3 is a new smartphone from a Chinese company you may have never heard of, yet it contains the newest Snapdragon processor and a big battery at a fraction of the cost of top Android phones. You just have to get be okay with a awkward user interface and that missing headphone jack.

You may not have ever heard of LeEco, but the 'Netflix of China' is estimated to sell 25 million phones this year, and its latest is coming to the US.

It has the same Snapdragon 821, which LeEco touts as the world's fastest smartphone chipset (Samsung and its faster Exynos, non-US processor disagree).

There's also a much larger battery and dual Dolby Atmos speakers, and they're sandwiched in between the brushed-metal body and Gorilla Glass-protected screen.

Best of all, it's supposed to be able to match the processing power of the new Google Pixel, but it's doing so at a much cheaper price.

It doesn't have it all, as the 5.5-inch display is just 1080p and the software is one step behind when it comes to having an older Android operating system.

Flagship specs at a mid-range price? We've seen it before from Chinese firms with the ZTE Axon 7 and OnePlus 3. Let's see how the LeEco Le Pro 3 compares.

The official LeEco Le Pro 3 release date is November 2 and the price is $399. It comes with a three months of the company's EcoPass.

EcoPass includes a two-year warranty, 5TB of cloud storage on LeCloud with unlimited space for photos and videos, an unlimited Fandor movie pass and exclusive sales on it's shopping destination, LeMall.

LeMall is where you're actually going to have to buy the Le Pro 3, or any LeEco gadget for that matter. It won't be sold in carrier stores like AT&T and T-Mobile, and it's a GSM-only phone, so it won't even work with Verizon and Sprint.

The phone (or Le Phone) is really just a way to suck you into its vast ecosystem, and that's why this phone is as cheap as the OnePlus 3 and ZTE Axon 7.

It's launching another Android on that same November 2 release date: LeEco Le S3. It costs just $249 with dialed-down specs. You're not getting the Snapdragon 821 at that price.

It reminds us of the OnePlus 3... a lot. It has a very similar metal body and nearly rectangular shape that's sloped around the top, bottom and sides on the back.

Basically, instead of that '1+' logo on the back, there's a fingerprint sensor. We tried to somehow peel off the square-shaped sensor to see if there really was the OnePlus logo there. No luck.

That 5.5-inch display is also 1080p, which is okay for a phone of this size, but an odd choice because LeEco is fully invested in streaming video and, now, virtual reality via its ExploreVR headset. Those individual pixels can look big up close.

It doesn't have a home button like the OnePlus 3, instead going with dedicated capacitive buttons on the bottom chin of the Le Pro 3. The home button is the LeEco logo, and it's flanked by a recent and back button.

What you think of these capacitive buttons depends on your button preference. Other Android phones opt for physical buttons and others go with on-screen buttons.

One annoying quirk we sometimes see with capacitive buttons is that they don't stay stay lit, though there's a chance that'll be an option in the final software settings. We like to have that option. We'll update our review when the phone finally launches when we find out.

It does have a fingerprint sensor on back, one that's not a press-in type of button. It wasn't set up for us, so that awaits further testing too.

A glaring omission we can talk about right now is the lack of a headphone jack. Like Apple and Motorola, LeEco is going all-digital with USB-Type C audio.

Good luck charging and listening to music at the same time, just like on the iPhone 7 and Moto Z. If you're already using Bluetooth earbuds, you'll be fine. You'll also relish the fact that there are dual speakers.

The highlight of the LeEco Le Pro 3 is that Snapdragon 821 processor. It means this Chinese phone is one step ahead of almost everyone else in the world.

It's an incremental one-up that may not mean a lot right now in benchmark, but it could mean this phone carries you into the next two or three years without performance issues. That's important.

It also has 4GB of RAM and 64GB of internal storage, which is a great value. Sadly, you won't find a microSD card slot here. Of the big Chinese phones are a mid-range price, ZTE Axon 7 has cornered the market on expandable storage.

LeEco Le Pro 3 promises to have excellent battery life despite its fairly slim girth. It packs in a 4,070mAh battery – with Qualcomm 3.0 QuickCharge – despite the entire package being 7.5mm thin and 177g.

We're waiting to see if the camera is where this phone becomes a lightweight. It does have a 16MP camera on the back with 4K video recording, and an 8MP camera on the front.

We don't expect perfection  given our tests in the demo area; not at a mid-range price. This isn't meant to be a pixel-perfect shooter from Samsung or Google, but enough to get you by on Facebook and other social media platforms.

You're also going to find the user interface works differently than any Android outside of China. The notifications shade doesn't have quicksettings – at all.

Instead the usual 'Recent' button leads to a quick settings pane along with your most recently open apps. There's also no app drawer whatsoever.

That's very common among Chinese Android phones, and it annoys the hell out of people in the West. We've heard your complaints.

You're also going to dealing with Android 6.0 Marshmallow, curiously enough, not Android 7.0 Nougat and not Android 7.1 launched with Google Pixel.

There's some potential behind the UI because LeEco happens to be a software-focused company, unlike a lot of other Android phone makers.

Its unmovable Live TV on-screen button at the center of the dock leads to a grid of shows to watch from its streaming service and partners.

It's basically, your ticket to unlimited streaming from its version of Netflix, with a twist that things are playing all of the time in progress in addition to being on demand.

LeEco has ambitious plans for Le Pro 3, with an ecosystem that spans multiple gadgets, including TVs, VR headsets and even self-driving cars. But this is a first step to getting at least one hardware device in the hands on consumers.

At a low price and with powerful specs, it's certainly possible this phone could be the beginning of LeEco's lofty cross-platform stream-everywhere goal

However, long-term quality and reliable features are important so that this phone appeals to cutting-edge users who would want such a capable ecosystem. Otherwise, Le Pro 3 is destined for bargain phone shops as the first non-flip phone for everyone's grandparents. That's a very easy trap for cheap phones – one that aren't an iPhone or a Samsung – to fall into in the US.