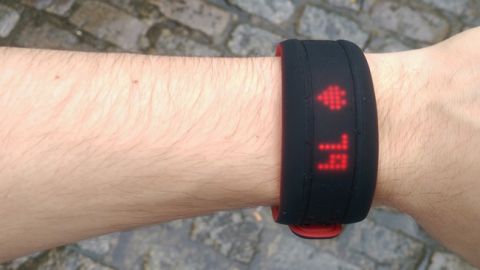 An excellent product for hardcore runners who don't mind its cost and aesthetic failings, not a step counter for your mum.

The demise of the sat nav is nigh, it seems. The likes of TomTom, Magellan and Mio were once the leaders of a market that would seemingly never lose direction. Now they're like brands fleeing a sinking ship, and just as TomTom fled to the loving embrace of fitness and wearables with the TomTom Multi-Sport Cardio, Mio has followed suit with the Mio Fuse.

On the surface, it doesn't make a whole lot of sense, but this is still a case of getting from A to B. That analogy was obvious in the world of sat navs, but fitness gadgets are still trying to help you get from where you are now, to where you want to be. It's the same principle.

Mio Fuse is a heart-rate activity tracker. It's not a full-fat running watch, it has no GPS, and it doesn't track the ridiculous sorts of metrics that watches like the Garmin Forerunner 920 XT and Suunto Ambit 2 do. It's a closer equivalent to the Jawbone Up 24, and Garmin Vivofit.

Don't write Mio Fuse off just yet though, because there's more going on here than meets the eye.

That's because what meets the eye is a little tacky at first, quite honestly. It's what an estate agent would call 'rugged and durable', which is to say it's a big heap of black silicone.

In the middle there's the LED dot matrix-style display. It's simple, but an effective way of displaying the time, your pace, heart-rate and all that stuff.

The slightly raised bumps at either end of the display indicate the touch-capacitive 'buttons' - just touch to switch between functions. There's a small touch-button in the middle below the display as well, which is used to activate the heart-rate monitor.

Some will find that the strap is a bit bulky, but not nearly as bulky as wearing a chest-strap heart rate monitor. It's not the worst thing we've ever seen, but it doesn't feel like a great deal of thought has gone into the design. Still, it's not London Fashion Week and we're not David Gandy.

The silicone is at least comfortable, and the LED display is probably a large contributor to the Fuse's excellent battery life. We used it everyday for a week, and managed a solid six days out of a single charge, including occasional use of the heart-rate monitor for exercise.

Yes, you heard us right, and this is where the similarities with TomTom continue. Mio Fuse doesn't need a chest strap to keep tabs on your beating heart, instead it uses an optical sensor like that on the TomTom Cardio watches. The electro-optical sensor sits neatly on the underside of the main 'watch face' and senses the volume of blood under the skin, taking that data and running it through complex algorithms to work out your heart rate.

That sounds stupidly complicated, and it is rather. But, hey, it actually works, which automatically separates it from the wildly innaccurate heart-rate monitors on other bands like the Fitbit Charge HR. The Mio Fuse is as accurate as any chest-strap HRM we've used, and without the hassle. Touch and hold the centre of the band and the Fuse will find your heart-rate and start displaying that along with your pace in real-time. You can set up personal heart-rate zones via the app, and the Fuse will buzz when you've crossed the border out of or into your target zone, telling you to raise or lower your pace via the LED display. Little features like this make it perfect for anyone who's serious about heart-rate zones.

Aside from that, the Fuse also has a 3-axis accelerometer, which is uses to count your steps and track your pace and distance travelled. This is where the Mio Fuse starts to disappoint. It tended to be less accurate than the HTC One M8 we tested it against when tracking pace and distance. Pace seemed to be a bit of a guessing game, and it consistently tacked on extra distance to a route that we know is exactly 5km.

Similarly, the step counter works fine if you're looking for a rough idea of whether you're doing more or less each day. If you want an accurate idea of how many steps you're actually doing, the Fuse isn't going to help you with that.

Mio's band connects to your phone via Bluetooth 4.0, where it will sync with any other fitness app you could possibly want to use.

This is good news, because the Mio Go app is a bit naff. The heart-rate charts are nice, and it's useful for setting your own HR zones, but apart from that, there's nothing else of note - you're much better off with a fully featured running app like Endomondo, Strava or Nike+.

You can use the Fuse as a standalone HRM if you like, and connect it to any ANT+ compatible smartphone, bike computer or running watch. And although it's not a swimming tracker, it is still waterproof to 3ATM, making it safe as houses in the shower or a swimming pool. That said, Mio admits that the heart-rate monitor tech won't be very effective in water - though it didn't seem to have a problem with the rain. At the very least, Fuse is extremely adaptable.

So, that's rather a mixed bag of pros and cons - where does it leave us?

Everything that is good about the Mio Fuse and accompanying app surrounds the clever heart-rate technology. As a heart-rate monitor it's accurate, with a nice range of accompanying features such as customisable heart-rate zones, vibrating alerts and data that can be exported to any fitness app you like.

That in itself makes the Fuse an interesting proposition, but...

£130 is expensive for a heart-rate monitor, even one as good as this.

On top of that, the rest of the features are a bit lacklustre and not worthy of the price. The design won't please everyone, and some will inevitably find the whole thing cumbersome and clunky. If you're looking for an all-round fitness tracker that will count your steps, and , there are better options on the market from the likes of Fitbit, Jawbone and Withings.

If you're absolutely sold on the heart-rate options, and you want something that'll give you that data without the weight of a chest-strap, we would absolutely recommend the Mio Fuse, and we think you'll be more than happy. Just don't come expecting much else, because then you'll be not-so-happy.