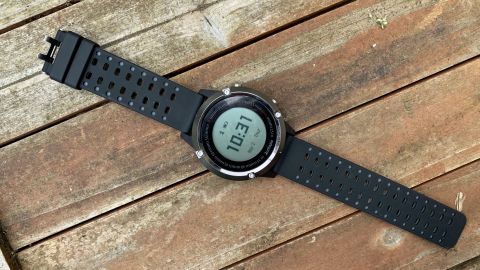 The Runtopia S1 is an appealing first effort from app developer, Runtopia. It has its faults but a low price tag and a great battery life means you'll forgive its flaws. Just don't expect to wear it on a night out for anything other than your regular running session.

Runtopia is well known run tracking app that provides motivational incentive by offering free stuff in exchange for being active. Now, it has moved into the GPS running watch world with its first smartwatch - the Runtopia S1.

A budget offering, it lacks many of the finer features that other pricier smartwatches and running watches offer, but when it comes to raw ability to track your runs, it's hard to pick fault.

Here's our full verdict on the Runtopia S1 and what works and doesn't work for it.

Unlike most other smartwatches and running wearables, the Runtopia S1 only has one wrist strap to choose from - a rubber based strap with the casing made from zinc alloy.

The lack of options here isn't ideal if you're keen to make a fashion statement or you're trying to track down a bargain via a less popular design, but it makes sense for such a low priced wearable. The wrist strap itself can be removed and replaced with another conventional strap if you want, although Runtopia doesn't sell others itself.

For now, there's no exact launch date for the UK or Australia, but the Runtopia S1 is available at Amazon for $99 with a long term discount reducing that price to $69 (about £75, AU$140) for the foreseeable future.

The Runtopia S1 isn't much to look at. That's not to say it's ugly but it's a fairly typical if unexceptional looking running watch. This isn't a device for fashionistas in any way but that does mean it's straightforward to use.

Weighing about 55g, it has chunky and thick dimensions of 47mm. That means the watch face is very clear to see at all times. As you'd expect from a running watch, you can clearly see all readouts imaginable, even if you're mid-run at the time.

While we haven't tried throwing it around, it has gone through a little wear and tear, and you'd never be able to tell. Thanks to its rigid design, you won't have to worry about scratching it while trail running through a wood, for instance.

The black rubber strap is cheap to the touch and liable to make your wrist feel a little sweaty after extended use, but you can always swap it out for any other regular watch strap. A small button on the strap connector easily pops it out so you can change things up if you want.

The Runtopia S1 sticks with just two chunky buttons on the right hand side of the watch face. One is essentially used for scrolling through the menu while the other works as a 'back' button. Its touch screen display is used for opening apps displayed on the menu. It's simple, like the rest of the watch, but it works just right for this kind of role.

The back has an optical heart rate monitor which sticks out ever so slightly but it's not unseemly and you won't notice it during use.

Charging is a little unusual compared to other smartwatches. Instead of a large magnetic puck to place on the back, the charger uses a tiny port on the back of the watch under the heart rate monitor, which attaches via magnets. Its electrodes look a bit unsightly but you'll hardly ever see it and it's not like you'll need to charge it often.

Like other running watches. including the highly acclaimed Garmin Fenix series, the Runtopia S1 uses a monochrome display. Its resolution is a mere 128 x 128 but that's plenty for displaying its simple text layout. Small pictures demonstrate each menu item but they're almost Nintendo Gameboy-like in their simplicity.

Whenever not in use, you can see the time, date, battery life, and Bluetooth connectivity status, with a tap of a button illuminating the screen. The bezel around the screen is thick but it suits the rest of the nature of the watch, merely ensuring that nothing is going to damage this timepiece easily.

The Runtopia S1 uses a proprietary OS so don't expect a massive choice of watch faces like with a Wear OS device or Apple Watch. Instead, there's a choice of three slightly different looks, each continuing to offer the same amount of information as the last.

It's all suitably minimalist but anything fancier would look awful on the monochrome display.