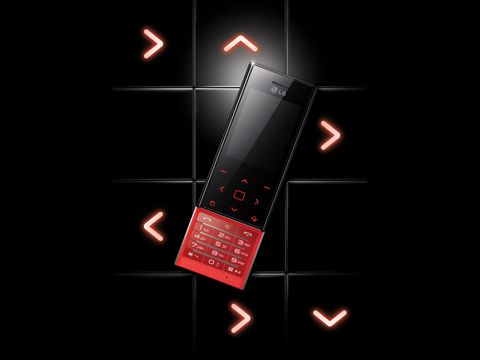 A distinctive and stylish design, the LG BL20 is definitely one for those that value form over function

LG has introduced a more sweetly priced slider phone – the Chocolate BL20 – to try and tempt style-savvy phone buyers not interested in the more feature packed (but higher-priced) Chocolate BL40.

Sporting a similarly sleek design, the LG Chocolate BL20 is the latest update of the original LG Chocolate phone (KG800) that first appeared in mid-2006.

Central to the chic look is a smooth, glossy piano-black casing that features hidden touch-sensitive controls on the front panel that glow red through the casing only when the phone is activated.

It's a more refined look than earlier Chocolates, echoing the BL40's design – although the Chocolate BL20 has fewer high-end features than its touchscreen range-mate.

The new Chocolate BL20 instead offers a more typically mid-priced mobile package – including HSDPA high-speed 3G data connectivity, a 5MP camera, media player functionality and an FM radio. But the real headline on this new phone from LG is certainly style.

The minimalist bodywork of the closed Chocolate BL20 is certainly attractive. Its black bodywork is offset with metallic red trim on top and bottom and on the slide-down number pad, plus some subtle chrome edging.

However, all that glossy bodywork does mean it can be slippery in cold or damp conditions. Covered in a single plastic sheet, the front panel is also a finger-smudge magnet.

The display is a 2.4-inch QVGA (240 x 320 pixels), 262K-colour LCD, which is bright and zingy enough for most applications. It's not as big as a smartphone-style screen, but is acceptable for this type of mid-range device, especially with no touch control.

The original Chocolate phone was one of the first to introduce a touch sensitive navigation pad, and the BL20's similar digit-stroke control panel takes up most of the space under the screen.

A central select button surrounded by four direction arrows glows out from behind the black casing when the slider is opened or the phone activated, delightfully fading again when the phone goes into standby mode.

These buttons work conventionally to navigate around menus, albeit requiring light touching rather than pressing. They each also do typical phone shortcuts for calling up features, including text messaging, contacts, ringer profiles and a quick menu grid (you can select up to nine apps or functions for fast-touch access).

Other buttons include two regular softkeys, a button that shows active features as icons on a toolbar, and a widgets key.

This key pulls up five mini apps you can scroll between on screen, wherever you are in the menus. Functions include an alarm clock, memo writer, calendar, favourite contacts list and an online-based weather forecast app you can define for your preferred location.

A light finger glide is all you need to use the controls, like stroking a mobile phone version of a duckling. Dabbing around the menus is similarly effortless, although the sensitivity of the controls to even the merest of touches can cause accuracy issues if you're not handling it carefully.

A stray thumb or finger brushing the pad (generally your own) can accidentally activate a shortcut or the select button.

It's not particularly troublesome in most features but has potential for irritation in some, such as if you accidentally select send while composing a text.

LG has included touch activated volume/zoom controls around the BL20's side, plus a camera key and a screen lock button.

A single microUSB socket on the side takes care of charging, PC data connections and earphones; there's no standard 3.5mm headphone socket on the phone (boo), though an adaptor is provided in-box (slightly quieter boos).

The sprung slider mechanism revealing the number pad feels sufficiently robust. The pad itself provides large keys with plenty of finger room, and despite being flush against the surface are very responsive for fast, accurate texting. The metallic red finish is arresting too.