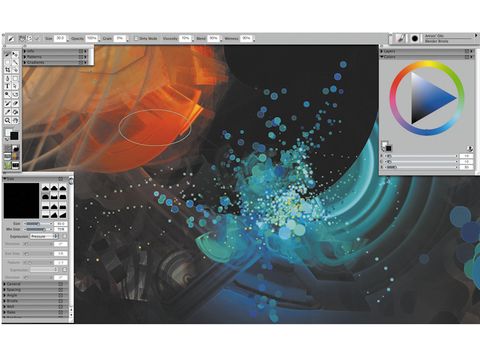 With a cleaner interface and some nice touches, the new version of Corel Painter is a good upgrade

Adobe's Illustrator and Photoshop may rule the vector and photo-editing roosts, but it is Corel's Painter that has become the mainstay app of the digital painting community.

Designed to mimic natural drawing and painting environments as closely as possible, previous versions have introduced – among many other features – an ingenious Real Bristle system that renders individual brush bristles while painting, and Mixing Palettes for working with oil and water, imitating paints in a genuinely realistic manner.

While, at first glance, such groundbreaking new features are absent in this latest version, what is immediately noticeable is the significant speed bump the application has received combined with a sleek and highly efficient interface overhaul.

Corel has cut back a lot of the clutter from the interface – tucking panels away and allowing them to snap in and out of the main area from tick marks in the drop-down menus.

Some palettes – and rather oddly only a few – including the Colour and Mixer Palettes can now be resized, while the new Hard Media and Colour Variability palettes make editing brushes a far more direct experience.

The whole app seems to have gained from a performance boost, too. While we did encounter a little hanging around while changing to very large brush sizes, the overall responsiveness of the painting system appears sharper and more precise, especially when combined with a Wacom tablet.

Apart from the interface and performance features, Painter 11 includes 40 new Natural Media brushes. Those familiar with the program will know this is where Painter excels.

The new brush highlights include a Sharpie style pen, various weighted pencils, and a new Markers category, together with acrylics, calligraphy, chalk, charcoals, conte crayons and a new Real Variable Tip Pen in the Calligraphy category.

Again, the RealBristle painting system developed in Painter X responds brilliantly to tablet input, recognising tilt and angle, as well as flow and pressure of a stylus.

Painter's colour capabilities have also had something of a boost: new swatches are available and now profiles can be created, edited and saved down, as well as imported from Photoshop or another image editor.

However, these are where Painter 11's new features end, with any further enhancements to the app being just that – tweaks on existing functions and tools. The most successful of these is the redesign of the Transform tool, which is now located in the Edit menu and Property palette. It's now both far easier to find and use – a serious bugbear of previous versions.

A range of further mini-fixes make up the rest of the updates; there's PNG support, new RGB colour sliders, and the interface and stability of the program have been improved.

There's no doubt that this is a successful update, but it's certainly not an exciting one. There are no new revolutionary tools or serious headline features, but Painter 11 most definitely builds on the successes of previous versions.