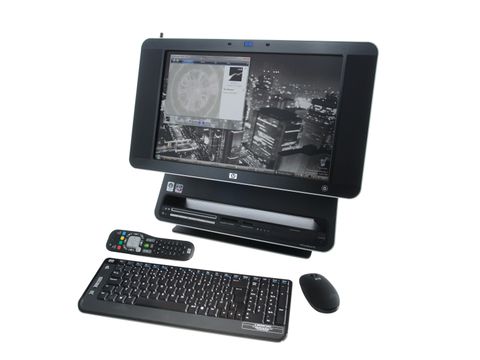 At over 20kg, this isn't a system that you're going to want to move around a desk or worktop

An interesting departure from the norm, but its size and weight are a bit of a hindrance

The all-in-one is hardly a new idea, but in terms of modern computing it does appear to be something of an enigma for PC manufacturers.

Manufacturers such as Sony and Philips have tried producing machines that appeal to a different democratic from the screen-and-chassis brigade, but it's only really Apple that has managed to make any headway with the idea, with its stylish iMacs. Enter HP, and the Touchsmart IQ770 PC, a system that may have cracked the puzzle.

The main pitch for this machine is the 19-inch widescreen display, boasting touchscreen input. Touchscreen has traditionally been little more than a gimmick for desktop machines, but when it comes to this type of all-in-one, it's essential.

And when we say this type, we mean that second - or more likely third - machine that sits in the kitchen or living room and offers up all manner of entertainment and Internet access without requiring that you continually reach for the wireless keyboard and mouse.

HP has shipped the AMD Live! branded system with Windows Vista, which adds another layer of simplicity to the whole approach - something that's highlighted by the HP SmartCenter.

This is essentially a large format homepage filled with quick links to user-definable items that you want instant access to - such as email and calendar. A touch-sensitive button in the bottom right-hand corner of the screen affords access to the homepage at all times and, in that kitchen environment, could genuinely be both useful and often used.

Just as iMacs and other all-in-ones have borrowed extensively from laptop technologies, so the Touchsmart IQ770 liberally helps itself to the more power-conscious devices. The X2 AMD processor is an obvious, but essential, choice for any media machine, and while this is only a Turion model (a 1.6GHz TL-52 to be exact) it still has the power for the job at hand.

The 2GB of DDR2 RAM has been hooked up to this dual-core processor to provide sufficient room to throw around serious entertainment too - this is a Vista machine after all. A 320GB hard drive finishes off the bevy of core components, to produce a system that's just as able at resolving complex pivot tables in Excel as it is at playing back H.264 movie trailers.

This isn't an obvious gaming machine, and certainly lacks next-generation pixel-pushing grunt, but the integrated Nvidia GeForce Go 7600 isn't that embarrassing. The 3DMark06 score of 2299 shows that it will run last generation games with only a marginal amount of perspiring, especially at the native resolution of 1440 x 900.

The performance on offer isn't helped by the fact that Nvidia still isn't up to speed with its Vista drivers, and while this should improve over the coming months, Nvidia clearly should have sorted this out by now.

Of course, one problem with a machine based on laptop technology is that the graphics subsystem can't be upgraded easily, so you'll have to live with this graphics engine through thick and thin and, with DirectX 10 titles imminent, buying a machine based on last generation engineering makes this a questionable option, if gaming is a serious focus for the system.

Despite the use of laptop components, this isn't a light machine. At over 20kg, this isn't a system that you're going to want to move around a desk or worktop, let alone from room to room. This is a bit of a shame for a single-power plug machine, but then its weight lends a solidity to the system that makes the touchscreen display resilient enough to be useful.

HP would probably like you to end up questioning what the role of the computer is, and indeed what a PC is. In truth, though, it's fairly obvious to the trained eye that there's little new on offer here, just a reworking of ideas that we've seen numerous times before.

That's not to say that this machine is without merit - in fact, as that elusive machine that's ideal for the kitchen it's possibly the best all-in-one we've ever looked at. However, the sheer size (and not inconsiderable weight) of this PC conspire to make a more portable version of the Tablet PC (or more mundanely a normal laptop) a more attractive option.