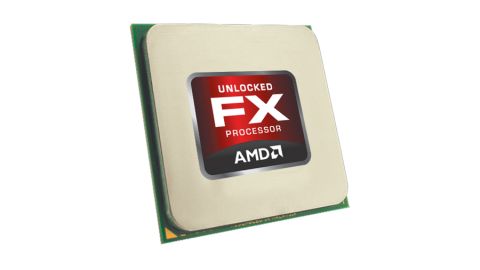 The first chip we had in the labs was, somewhat inevitably, the top-spec, eight-core AMD FX-8350. And well received it was too. But by virtue of only being a little cheaper than the excellent Intel i5-3570K, it was almost pricing itself out of the market.

The one that we've been interested in getting our techy mitts on is this six-core FX-6300. It's almost the perfect sweet spot for budget gaming CPUs.

The original FX-6200 impressed us recently with its combination of bargain price, impressive multi-threading performance and serious overclocking chops too. In fact, you could push it up to almost the same CPU performance as quad-core king, the i5-3570K.

With that sort of raw processing power from a cheaper chip you could then drop the money you're saving going for an AMD platform and plough that cash into a superior graphics card. After all, in gaming terms, it's the GPU that will make the difference in frame rates.

Still, the same Bulldozer problems reared their heads with that six-core chip as with the eight-core: namely weak single-threaded performance. The enhancements in Piledriver don't represent a massive change to the Bulldozer architecture though.

The essential make-up still remains the same with each module housing most of the silicon that makes up a traditional core. But, crucially, not all the silicon. What AMD has done is tighten up the code a little, offering a quicker approach to processing. It has improved engineer-pleasing goodies such as branch prediction and scheduling, but it is leaving the major architectural changes for the Steamroller update that ought to be arriving next year to give AMD a bit of help when Intel's Haswell tips up.

Steamroller should squeeze more into each Bulldozer module to allow each core to function much more like a traditional CPU core, and should seriously beef up the single-threaded performance of the next generation processors. But that's quite a way off, and so we have to be content with this current heavy plant update.

In a bit of a switch around from the FX-8350, where it turned up with a 4GHz clockspeed compared to the FX-8150's 3.6GHz, this six-core CPU is set up slower than its Bulldozer ancestors. The FX-6200 was originally set to run at 3.8GHz while this Piledriver version is set at just 3.5GHz.

That's not the only difference between this and the previous chip as, despite having the same general make-up and 14MB cache size, the FX-6300 has got a lower TDP than the Bulldozer. At 95W then it's a little more efficient than its progenitor.

Pleasingly that drop in both TDP and clockspeed doesn't mean this is a slower chip in real-world terms.

The benchmarks show that almost across the board this chip is faster than the higher clocked six-core CPU. Only the x264 video encoding test highlights the slower clockspeed, posting slower frame rates than the FX-6200.

In the other straight CPU performance tests in Cinebench it shows a very slight advantage, though the improvements in single-threaded performance aren't as pronounced as with the FX-8350. But I think that has more to do with the eight-core chip's 4GHz clockspeed.

Still, to post the same sort of ballpark figures at a lower frequency than the previous generation is impressive, but what's more impressive is the boost in gaming performance that the Piledriver update seems to offer.

In our Batman: Arkham City test it adds another 10fps on average over the FX-6200, and a couple of frames per second in the tighter Shogun 2 CPU test.

With the clockspeeds taking a cut compared to the previous processor, and a lower overall TDP to boot, you might be forgiven for thinking the overclocking prowess of this Piledriver CPU may have been compromised. Not so. In fact if anything the overclocking performance has been enhanced.

We've even managed to push the FX-6300 over 5GHz and had it stably posting benchmark scores. I did have it booting at 5.1GHz, but we couldn't stop it falling over under the rigours of x264.

Part of that is down to the fact that it's a very cool-running chip - at stock speeds it's running at 28°C under load. Sure the temperature starts getting rather toasty under your CPU cooler, but the performance figures take a huge jump too.

The multi-threaded performance easily eclipses a stock Core i5, and almost manages to do the same in single-threaded performance too. It's not far off in terms of gaming, with our low-end Batman: AC scores showing 155fps for the FX-6300 versus 164FPS for the stock-clocked i5-3570K.

You will need a massive cooler and quality mobo to get to that sort of overclock, but it shows how competitive the Piledriver chip can be made. Especially considering it's only just over £100.

That said you don't really need to have an overclocking mobo to push the Core i5 up over 4.5GHz and gaming performance will quickly outstrip the AMD chip. Still, as a budget alternative, the FX-6300 is a very capable CPU offering decent multi-threaded performance, even at stock speed for use in productivity-related tasks and improved gaming performance too.

There's still no getting away from the fact that the Intel Ivy Bridge chips are ideally what you want in your machine, but the AMD alternatives are there if you can't afford to stretch all the way to a full Intel platform.

By virtue of its Black Edition status, the overclocking is relatively easy and gives you multiple ways - baseclock or multiplier - to get to the highest frequency you can. Being able to run happily at 5GHz is nothing to be sniffed at and has the makings of a top budget CPU.