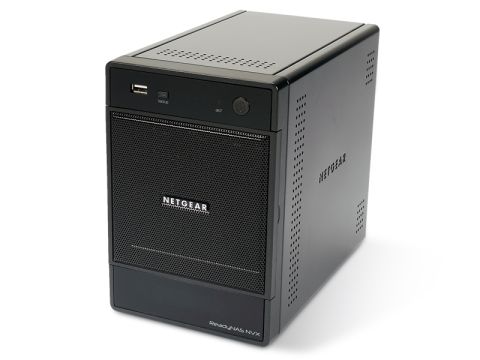 The ReadyNAS NVX is impressive at 4TB, but far too expensive

Netgear is asking a bit much for this otherwise outstanding NAS

How much storage do you really need? That question lacks a definitive answer, but you need to ask it before considering the latest addition to Netgear's ReadyNAS family.

More space equates to higher prices, and in the case of the NVX, you're looking at the sort of money that would buy you a whole new Mac – not too surprising when you consider that this is a fully functional computer in its own right – with 4TB of storage to call on.

The ReadyNAS NVX is impressively heavy, and plastic front door aside, is sturdy enough to survive some serious knocks. It's a high-spec machine as well – boasting 1GB of RAM and two Gigabit Ethernet ports.

The capabilities list is impressive: aside from the ubiquitous printer server, you'll find it also offers an iTunes streaming server and Time Machine support for one of your machines.

Netgear has kitted the unit out with four SATA-II ports which, when used with the default X-RAID 2 (offering up to 2.7TB of fault-tolerant storage), manage read speeds of 10.21MB/s and a write performance of 10.37MB/s. Stunning, in other words.

There are problems with the NVX though, not least of which is the price – 1TB drives can be had for less than £60, so even allowing for the other hardware, there's some serious creative accounting at work here.

Netgear claims the unit is "whisper-quiet" too, but it really isn't. It's as noisy as a PC, which, given the high-performance internals, makes sense, but why claim it's nearly silent? We'd prefer better security on the unit itself, but hopefully its sheer weight should deter thieves.