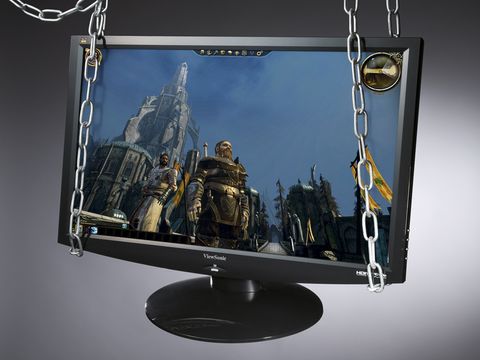 Iffy build and mediocre image quality. But a lot of screen for the cash

There was a time back in the mid noughties when Viewsonic had an enviable reputation for producing some seriously sexy, slim-bezel monitors. Today, the Taiwanese outfit has its sights firmly set on the value end of the market with the release of the VX2433WM 24-inch monitor.

On the upside, that means you can bag this generously proportioned 24-inch widescreen puppy for a truly bargainous £175. On the downside, that price does come at a cost, if you catch our drift.

For starters, the build quality is pretty low rent all round. The base of the stand is particularly ghastly, hewn from cheap and hollow plastic and well into cat-flap-in-a-tornado territory in terms of lacking reassuring robustness.

Still, at least it offers a comprehensive feature set. It's well specified in terms of inputs with HDMI, DVI and VGA interfaces. Likewise, it has all the usual image enhancement features that you would expect to see, including dynamic contrast and also a few that don't.

The most obvious example of the latter is the triple-level toggle for response enhancing overdrive technology.

As we've explained in PCF's passim, overdrive technology works by sending an increased voltage through a given pixel. That in turn gives the liquid crystals a kick up the knackers and accelerates the pixel towards the new colour state more rapidly. In theory, that means faster response and less blur issues.

However, close inspection of some overdriven monitors reveals a visual artefact known as inverse ghosting. It typically involves a trail or shadow that appears in the wake of a moving object in approximately the opposite colour to that object, hence the term 'inverse'.

The choice, therefore, is really yours; either a slightly nippier responses or artefact-free, but slightly blurrier fragging.

Elsewhere, the Viewsonic puts in a pretty mixed performance. The measured maximum brightness clocks in at just 174 nits. That's well, well down on Viewsonic's official claim of 300 nits.

However, the screen's static contrast result of 874-to-one is a very solid result and certainly close enough to the officially quoted 1,000-to-one figure to avoid any embarrassment. Even better, that measured contrast performance translates in practice into satisfyingly deep black levels.

Make no mistake, you don't get the sort of rich inkiness that the best PVA panels deliver. But this is about as good as it gets with TN technology currently. There's certainly plenty of detail in dark gaming scenes, such as those that pervade Batman: Arkham Asylum, one of our favourite beat 'em ups of the moment.

Overall, then, if it's the wow factor of the largest possible screen you thirst for, the VX2433WM has plenty to recommend it. But be very aware that the impact of the cost cutting on the build quality will be immediately apparent from the moment you debox.