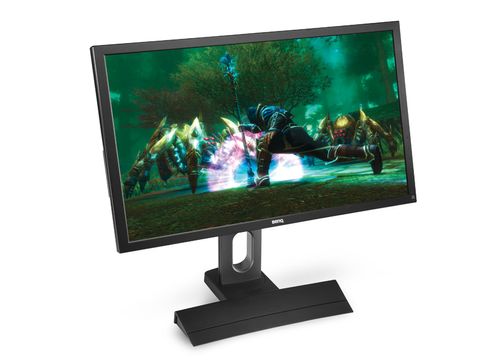 Ever eager to hit the ground with the latest eye-candy, here's BenQ's excellent XL2420T.

When it comes to PC monitors, there are two things we find particularly tiresome. The first is novelty "gaming" monitors underpinned by cynical marketing tie-ins. The second is finding yet another TN panel under our noses.

Say hello, then, to the new BenQ XL2420T, brought to you by alleged pro-gaming legends HeatoN and SpawN. Yes, we've just barely heard of them, too. And, yup, the BenQ XL2420T has a 24-inch TN panel. Oh dear.

But bear with us, because this monitor is so much better than just another chintzy branding exercise with a cheap panel. For starters, it supports Nvidia's 3D Vision 2 technology, which means LightBoost is part of the mix. LightBoost essentially comprises double the brightness of the original, while 3D Vision 2 also brings revised shutter glasses.

The BenQ XL2420T also has a great chassis and an unusually good TN panel. But is it enough to sideline the 3D monitor competition such as the LG DM2350D or Asus VG278H? Let's find out.

First up, the basic image quality kicked out by the BenQ XL2420T is truly exceptional. Thanks to rich and vivid colours, good contrast and relatively little evidence of colour compression on any of the scales, it might just be the best TN panel we've ever seen.

The only truly significant shortcoming compared to IPS, PVA and new-fangled PLS panels involves the vertical viewing angles. They're distinctly mediocre. Everything else is in pretty much the same ballpark, while the pixel response is typically excellent, as you'd expect from a TN panel, and doesn't betray any obvious symptoms of overdrive, which is a big bonus.

If the basic image is great, this is one monitor where adding tweaks is a true pleasure. The clever OSD that sits just above the Windows taskbar along with the soft-touch, backlit OSD controls, are the best we've seen, period.

Likewise, the programmable, mouse-like S Switch enables you to quick-jump between three panel presets in an instant. The chassis and stand are quality items, too, and offer the full gambit of adjustability - tilt, rotate, swivel and height.

Nvidia 3D Vision 2 support means a 120Hz refresh, which is good for everything. It even makes using the Windows desktop infinitely smoother and more responsive.

Meanwhile, in 3D mode there's absolutely no doubting LightBoost delivers easily the best looking stereoscopic 3D visuals we've ever seen. The colours are rich, the contrast is huge. It's truly specular stuff. OK, it will still make your eyes/brain hurt. But this is truly as good as stereoscopic 3D currently gets.

Viewing angles aside, the BenQ XL2420T offers super image quality. It has a particularly good stand and absolutely outstanding OSD controls. If that wasn't enough, thanks to Nvidia 3D Vision 2 and LightBoost, it's the best stereoscopic 3D monitor we've seen, too.

With such a strong all-round performer, it's hard to find flaws. However, in terms of image quality, the vertical viewing angles are clearly inferior to any IPS, PVA or PLS monitor. It's also worth noting that you'll need to pick up an Nvidia 3D Vision pack, since it's not included in the price.

Is the BenQ XL2420T the first TN panel that really delivers? We think so. It produces super stereoscopic 3D image quality, too.