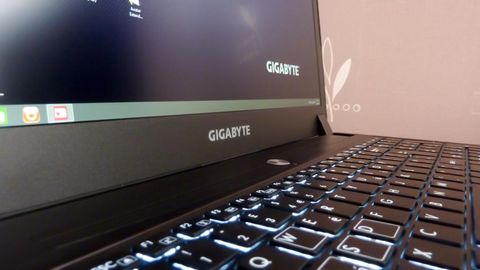 This gaming notebook performs brilliantly and is extremely well built. The P37X's noisy fans are the only real disappointment.

With a 1080p screen that delivers superb picture quality, the P37X brings the experience of using a desktop PC to mobile computing.

Retailing at about £1799 (around $2200, AU$2800), it's not exactly affordable, but it's fairly competitive when compared with other gaming laptops, which aren't at all the same thing as a portable computer used only for light tasks such as word processing or Facebook.

Before diving further into the specifics of Gigabyte's P37X gaming laptop, it's worth explaining these differences between portable gaming computers and normal laptops.

This corner of the wider computing market caters for its own specific niche, and is intended for a quite different usage scenario than your average Ultrabook or general-purpose laptop. As a rule, gaming laptops aren't light or thin, the battery life is awful and they cost a small fortune.

But in giving up those qualities, which are normally of utmost importance, a gaming laptop can offer desktop-like 3D performance and high gaming frame rates, by using components that are far more powerful than what's usually offered.

With generally dire battery life, a massive price tag and at times, less-than-elegant design, why would anyone want such a gaming laptop? The short answer is that they're a brilliant, convenient way to play PC games on the move, whether you want to enjoy a game of Civilization 5 to while away the time on a long journey, or to bring a gaming-capable PC to a friend's house for networked gaming.

LAN gaming is a wholly different, more fun, more sociable experience to playing PC games online, as all your friends are very much in the same room, able to share jokes and pizza, as well as the joint gaming experience.

And although consoles cater for this type of scenario as well, it's not at all the same thing. Many gamers prefer playing on a PC with its own dedicated display, rather than sharing a corner of a TV screen. It could be for playing FPS games with a keyboard and mouse, a strategy game that just doesn't work well on a console, or for one of the many PC-exclusive titles (for example, World of Warcraft). While some may be happy to bring their entire desktop PC and monitor to a friend's house, or an organised event to enjoy LAN gaming, a gaming laptop is a more civilised option.

Without the kind of powerful, high-end components that come with a high-end gaming laptop like the P37X, you won't be able to play at full resolution or enjoy most up-to-date gaming titles with a constant 60 fps frame rate. It's these high-end components that quickly suck a laptop battery dry, plus they output considerable heat that requires heavy-duty cooling, not to mention driving up the cost.

Next Page Specification and design