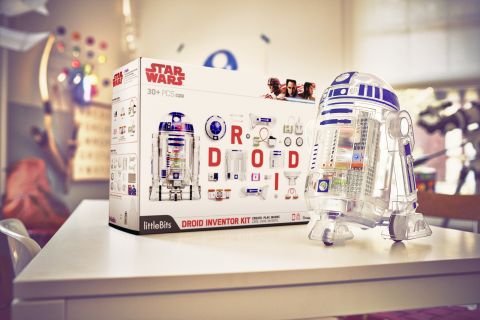 littleBits gives the term "educational toy” a good name. You and your family will love learning to build, customize and code a droid of your very own.

Arduino and Raspberry Pi have brought upon the golden age of DIY computer building and making, but the learning curve for building anything without a step-by-step guide is too steep for most adults, let alone children. Enter STEM toy maker littleBits, which provides magnetized, modular electronic parts that make it easy for kids and teens to build their own mini-computer rigs.

While many of littleBits' kits are a great starting point for children (or adults) with no tech or coding experience, we think the Droid Inventor Kit is the best option for kids ages 8 and up - regardless of whether they're Star Wars fans.

With this Kit, you’ll piece together your own app-controlled, customizable R2-D2 droid... and then take it apart and rebuild it over and over again, reconfiguring your Bits to teach it different skills like self-driving patrolling and a proximity-sensing “Force mode”.

littleBits’ transparent plastic aesthetic won’t look as movie-polished as Sphero’s R2-D2 droid, but owners not hung up on original trilogy authenticity can customize it to add a more personal touch. And while its maneuverability and out-of-the-box tech don’t hold a candle to Sphero’s mobile BB-8 droid, littleBits’ Scratch Block coding options add much more replay value and learning opportunities in the long run.

The littleBits Droid Inventor Kit officially sells for $99.95 (£99.95, AU$160) from most major retailers. Over a year out from its launch, however, you should be able to find a better deal. As of publication, Amazon lists it at just under $70.

For that price, you receive six modular bits and twenty-four pieces that make up your R2-D2’s plastic exterior. You also have free access to the Droid Inventor app - requiring a phone with an accelerometer, Bluetooth 4.0+, and either iOS 10.0+ or Android 4.4+ - which teaches you how to build and control your droid.

Without the app, you’re essentially buying a plastic, disassembled R2-D2 statue; so be prepared let your kid use your phone for hours at a time.

You attach those bits to the plastic pieces that eventually comprise Artoo’s body. Outside of the electronics, putting these pieces together (or taking them apart) only takes about five to ten minutes. Even a young child should have the strength to slide the pieces into place - however, some pieces, once secured, are very difficult to remove even with adult strength, so be prepared to step in to help.

On the other hand, other pieces like the legs and head easily pop off should you drop your droid from any height or hold it at an odd angle; it happened enough times over the course of a few days to be slightly aggravating. But the light plastic material ensures that even if a piece falls, it doesn’t break.

Once you’ve built your droid, it’s going to look much less sleek than the movie replica droids Sphero makes: the transparent shell, necessary for keeping the Bits visible, will always look a bit cheap to most. But for some, especially kids, you should see this as a positive, since it’ll let them design the droid themselves with favorite colors or patterns.

For those who choose to buy the Droid Inventor kit for younger children, we recommend you get them a sealable container for spare pieces. The smaller pieces, all transparent, are easy to lose track of and could represent choking hazards for toddlers.

Perhaps the greatest weakness to the design would be the wheels. Rolling on three skinny wheels, Artoo’s turns are quick but hard to control, and the front wheel tends to become misaligned. Sphero’s R2 unit, by contrast, has movie-accurate tracks that, while slower than wheels, make it much easier to handle carpets or uneven surfaces outside. littleBits’ R2 feels like much more of an indoor toy.

With the free Droid Inventor app, littleBits guides you through the steps to combine the bits and plastic parts into a mobile Arduino computer via tutorials called “Missions”. In each Mission, the app provides step-by-step instructions on how to build Artoo’s brain.

On a typical mission page, you’ll see what you’ve created so far, followed by the app highlighting and zooming in on the next Bit or part you’ll need. It then spins the object around to show you at what exact angle you should be placing or inserting it to ensure everything functions.

Once you check to see if your work-in-progress matches the animation, you swipe right and continue on until the end, where littleBits usually lets you test out your work and see if you got it right.

After the first eight missions, which have you build the most basic R2-D2 setup and drive it around, littleBits teaches you how to disassemble its plastic shell, rearrange the Bits to unlock new features, and put the pieces back together again.

Many will find this iterative process tedious; the app goes through the same 20 or so steps again and again to ensure young users don’t get confused while rebuilding it. But the best tricks are unlocked in later tutorials, so patient droid owners will be rewarded for their efforts.

Some of our favorite missions included turning Artoo into an Intruder Alarm, pushing and pulling it with the Force (technically the proximity sensor) and coding Artoo to drive through an obstacle course without any human input (after lots of trial and error).

Note that until you complete these missions, the app grays out any features you haven’t learned how to use yet. This ensures users don’t try to use Force mode from the outset and get confused why it isn’t working. While we think this makes sense, some will likely find this hand-holding frustrating.

If you’re feeling confident enough to jump straight in, simply swipe through the corresponding mission and mark it as complete to unlock the feature in less than a minute.

Overall, we found these missions extremely helpful for learning the ropes. The 3D animations make each step much easier to follow than if they were static print instructions. Children and adults with limited computing experience should have little trouble following each step, especially thanks to the Bits’ clear labeling and seamless connectivity.

We also appreciate the user interface, which captures the Star Wars aesthetic and manages to squeeze a lot of information into a small screen without looking crowded. It’s easy to navigate back and forth between mission steps or play back animations to ensure you know what you’re doing.

Plus, we never had trouble with connectivity. Within seconds of turning our droid on, the app would quickly find it through Bluetooth and maintain a stable connection throughout.

Unfortunately, we do think that the app, which has been out for over a year now, is far from flawless.

Some of our criticisms are minor: The app opens with John Williams’ iconic Star Wars theme, for example, but then falls back on more generic-sounding music during missions that can’t be muted. You can record a message for Artoo to play back to you - we went with “Help me Obi-Wan Kenobi”, obviously - but it plays back extremely quietly compared to Artoo’s other sounds, unless you shout.

But perhaps our biggest concern involves troubleshooting. Because even if you meticulously follow every step, sometimes things just don’t work.

For the “Secret Handshake” mission, for instance, we were told to attach the gripper arm to the servo bit, but the arm had a cross peg and the bit had a round hole.

Later, we tried out the self-navigation mission. After following every step, we turned the droid on and the front wheel would automatically turn perpendicular and refuse to move. With no calibration option or instructions predicting this glitch, we were forced to take it apart and start over.

Eventually we fixed the wheel on our own, but the self-nav mode failed for reasons we haven’t figured out yet: the sensor would register objects, but Artoo would determinedly plow right into them anyway.

Tapping the “?” symbol on every screen sends you to a Troubleshooting Tips page, but it’s the same list for every mission, and most of them cover the basics (e.g., “Is the power Bit switched on?” or “Are the Bits arranged correctly?”). Otherwise, you need to message their support email.

The majority of missions and controls did work entirely as described, and it’s possible we just didn’t follow instructions to the letter. But you should anticipate that, as with any DIY project, you or your young family will run into demoralizing errors that might discourage you all from sticking with the harder missions.

Overall, the app's movement controls function well enough. Due to the design limitations mentioned above, it can't fully compensate for the Droid Inventor Kit's iffy maneuverability. By comparison, Sphero's BB-8 can easily move in all directions, and the Force Band motion control wearable, while difficult to master, gives much more reliable movement control than littleBits' limited Force mode.

Once the thrill of driving your droid around dies, though, Sphero doesn't offer other features compelling enough to pull it off your display shelf. Whereas littleBits, by adding its new Block-based coding interface earlier this year, has provided much more long-term replay value to its droid.

The image above shows the gist of how the interface works. You tell your droid to move in response to stimuli for a certain amount of time. You can teach it to back away and scream when sensing movement; travel in an endless circle; change its LED lighting based on a random number generator; and any number of other logical actions.

It's a fantastic way to help young kids begin to understand the logic of coding. Pressing down on any block generates a pop up explaining in greater detail what each block of code does.

Six coding-specifc missions will teach you the basics, slowly walking you through how to handle each type of coding action. Strangely, for the most complicated "if then" and math-based coding, littleBits just tells you to have fun but doesn't give you examples of how to use them.

We also find it strange that the new interface is so hard to find. Even after you complete the Advanced Coding tutorial, littleBits didn’t think to add it as a control option in the Home screen. You have to go back to the last mission to use it.

Nevertheless, we plan to continue teaching our droid to perform random automated actions well after we finish reviewing it. It bears repeating that this droid doesn't just make it easy for young kids to master STEM concepts they've never learned before. Adults can benefit as well.

If you or your kids haven’t tried any connected robot kits before, you’d be hard pressed to find a better option than the Droid Inventor Kit.

Compared to other kits and bots, littleBits’ droid is much more enjoyable to set up than the Anki Cozmo and its instructions are much less daunting than the Ubtech Jimu TankBot Kit. It’s less speedy than Sphero models, but your family will get much more long-lasting enjoyment out of a bot you built and designed yourself.

If you have the patience to repeatedly disassemble and rebuild your bot until you've become an electronics master - and if learning to code doesn't sound too intimidating - then we'd recommend the Droid Inventor Kit above its more polished but limited rivals.