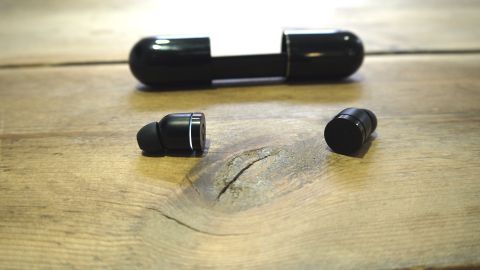 With terrible Bluetooth connectivity and a poor fit, you'd have to be crazy to buy the Crazybaby Air Nano wireless headphones.

Testing the Crazybaby Air Nano wireless headphones was an interesting experience, to say the least. Even if you don't like the design of a product, or you think the features are a little janky, you can usually expect it to work - unfortunately this wasn't the case with the Air Nanos.

Although they look great, they were so difficult to connect to our devices via Bluetooth that we struggled to get through one song without them cutting out - let alone using them to make phone calls or use voice-activated assistants on our smartphone.

All in all, the Air Nano's are just too buggy to recommend, and it's probably worth paying a little extra for Apple's AirPods or purchasing a more reliable budget option like the Optoma NuForce BE Free5s.

The Crazybaby Air Nano wireless headphones are available to buy for $99 on the Crazybaby store, with customers in the UK currently able to purchase them from Amazon for £118. If you're in Australia, you can buy them from Axon for AU$169.95.

Although the Air Nanos could be seen as a direct competitor to Apple’s AirPods, at only $40 (£30 / AU$55) cheaper we don't think they come close to measuring up.

The Air Nano’s come in a pod-like charging capsule - we tried out the black model, which looked sleek and streamlined, with a glossy finish and the Crazybaby logo in silver. The case opens with a sliding mechanism and clicks into place using magnets, with the earphones sitting snugly inside, again secured magnetically.

The earphones themselves certainly live up to the title of ‘nano’, with the ultra-compact bullet design making them not much larger than your thumbnail - along with the neat charging capsule, they would fit comfortably in your pocket while you’re on the move.

Although the charging capsule looks the part, it does feel a little flimsy, and we were worried about pulling it apart too forcefully and either breaking the case or sending the earbuds flying - it's best to open it one side at a time to avoid this.

The flat back casing of the bud features an engraved version of the Crazybaby logo - this part of the earbud can be pushed in to turn them on and off, control your music, and use the inbuilt microphone.

An LED band frames the back casing, which lights up when the Air Nano earbuds are switched on or charging - a feature which is both useful and looks really attractive.

They come with three extra pairs of silicone buds and two pairs of wingtips to hold the headphones in place while you're working out or running.

As you might have guessed, the performance of the Air Nanos was pretty disappointing. It took a very long time to connect them to our smartphone via Bluetooth, and even then, the connection would drop out at random, meaning we were constantly having to reconnect - in fact, we could barely get through one song without this happening.

When we were able to connect, the sound quality was surprisingly powerful, in spite of their compact size - we tried out ‘Wesley’s Theory’ by Kendrick Lamar, and the wobbly, bass-heavy synths definitely took center stage, sometimes to the detriment of the higher frequencies, which felt a little weak at times.

As much as we wanted to, we couldn’t get the Air Nanos to connect long enough to test out the microphone for using voice assistants or calls - so we can’t speak to its effectiveness at this moment in time.

They also aren’t particularly comfortable to wear - you have to push them quite deeply into the ear canal to experience any kind of audio power, and using the buttons on the back of the casing means you'll constantly push them in even further.

The Air Nanos look the part, and when they work they sound great - but they just don’t do that very often.

We liked the overall design of the earphones and the accompanying charging case, which looked very slick and is small enough to fit in your pocket, but they definitely haven’t been designed with comfort in mind.

Although the sound quality was fairly good, there’s not much point in having custom-made carbon diaphragms if you can’t even connect them to your device long enough to listen to one song.

The Air Nanos are often referred to as a cheaper alternative to Apple’s AirPods, which retail at $159 (£159 AU$229), but they are hardly cheap themselves at over $100 - and for all that money, you’re really not getting much quality in return.

We asked a representative from Crazybaby for comment about the connectivity issues, and they said that the problems could be down to "WiFi signals surrounding the environment and the compatibility levels with different devices" - however, having tested the headphones in a few environments and with a number of different devices, including the Macbook Pro, iPhone 6s, and the OnePlus 5t, we're not convinced that's the issue - and not one we experience with other buds.

The brand went on to say that "with all the feedback collected from our users, we are working on further [improvements to the] connection stability on the new models in the future."

That's all well and good, but based on our tests with two separate pairs, we can't recommend the Crazybaby Air Nano wireless headphones - and there are plenty of decent alternatives around.