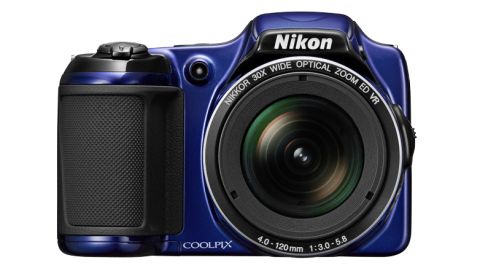 The Nikon Coolpix L820 is an affordable bridge camera

If you're going to bother bringing out a non-interchangeable lens compact camera these days, you'd better provide ample reasons for someone to buy it instead of simply relying on their smartphone as a one-size-fits-all solution. Big zoom compacts also known as bridge cameras, superzooms or ultra zooms, are currently where it's at - in that these are cameras that are actually still selling in significant numbers.

With our review sample fashioned in a high gloss maroon finish, Nikon's budget superzoom Coolpix L820 certainly attempts to stand out from the handset-wielding hordes.

And that's before we've even taken into account the fact that this relatively compact, mini DSLR-styled model finds room to squeeze in an impressive 30x optical reach, supported by lens-shift image stabilisation. This is a step up from the 26x reach of the Nikon L810.

OK so next to the 42x optical zoom of Nikon's P520, which was launched at the same time earlier this year and sits above it in the range, the whopping 50x zoom of Sony's HX300, and other bridge models, the focal range equivalent to 22.5-675mm in 35mm terms appears almost modest. A maximum lens aperture of f/3 also reads as nothing particularly special.

And yet, despite the fact that it shoehorns four AA batteries into its innards to provide power instead of a lithium ion rechargeable cell - lasting up to 320 shots according to CIPA standards - this Nikon doesn't immediately seem the cheap and cheerful product that a budget price tag of £220 / AU$275 / US$280 might suggest. Current online prices shave a good chunk off that full asking price too, making the Nikon L820 seem even more of a bargain for the specification on offer.

The headline features of the Nikon L820, while not earth-shattering, aren't too shabby either: a 16-megapixel effective resolution from a back-illuminated 16.79 million pixel CMOS sensor, 8fps continuous shooting, 3-inch fixed LCD offering an impressive 920k dots resolution plus 97% frame coverage in lieu of any alternative optical or electronic viewfinder.

Added to this, the optical zoom is supported by lens-shift vibration reduction, and the Nikon L820's macro option can get as close as 1cm from your subject. Full HD 1920 x 1080 pixels video recording at a frame rate of 30fps is included as standard.

There's stereo audio too, courtesy of twin microphones situated either side of the hump housing the pop-up flash. An HDMI output port nestles alongside a USB port, under a side flap. Though a USB cable is provided in the box, the HDMI lead is an extra expense.

This camera also misses out on latest must-have features such as integrated Wi-Fi - though it is compatible with Eye-Fi X2 variety cards - and it omits touchscreen control, too.

Likewise there's no raw file format shooting option, no location mapping GPS, no tilting LCD monitor and no hotshoe-come-accessory port. Still, there is a Smarties-like range of body colours to distract us, since the Nikon L820 comes in blue, maroon, plum or the far more sensible black.

JPEG still images and MPEG4 video clips are written to all varieties of SD media, or there's a small 65MB internal memory capacity to fall back on straight out of the box.

Coupled with that backlit sensor, the Nikon L820's low light capabilities are enhanced by a light sensitivity range that is extendable from the core ISO 125-1600 to ISO 3200 when using Auto mode.

This feels like very much a beginner's bridge camera, in that it's basically pick it up, point and shoot, eyes fixed on the rear LCD panel. But luckily that is reflected in the price and the pitch. It may look like a DSLR at first glance, but the control layout is much closer to that of your compact pocket camera, even if the shape suggests otherwise. This isn't about manual control, but rather the camera giving your photography a (modest) helping hand.