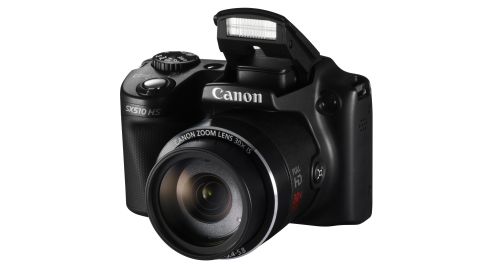 As diminutive as the SX510's frame is, it doesn't for one second feel toy-like. As we've become accustomed to with Canon's compact line up, high quality materials are paired with tasteful and understated design. From the rubber grip to the metal lens ring, the choice of materials shows consideration to both form and function.

You might expect a camera this small to feel fragile or fiddly in the hand, but the reality is pleasantly quite the opposite. Even in large hands, the carefully contoured grip gives you plenty of purchase and you never feel as if you're in danger of losing hold. Being so light, the camera sits gently in the hand and the weight, or lack thereof, makes it easy to maintain framing for long periods.

The grip and controls are all located on the right hand side, which makes one-handed operation simple. While the controls are all well placed, it can be a little bit cramped and some may have to perform thumb gymnastics in order to reach all the controls without shifting grip. Likewise, the zoom control switch may prove a little small to some digits.

Button placement is the standard Canon fare, centered on the scroll dial/directional pad combination that has become common in recent models. The scroll dial, which surrounds the directional pad, allows quick scrolling through menu options as well as the changing of settings such as aperture and shutter speed – depending on mode.

Directional pad shortcuts offer quick access to focusing modes, sensitivity, flash and timer options, while the central function button gives access to more detailed settings such as white balance, metering and resolution. The focal point of the top panel is a mode selection dial, which manages to squeeze in all 11 of the SX510's operation modes.

If you've used any recent Canon compacts, you'll find the menu system familiar and it's relatively simple to access all the camera's options. That being said, there are so many different mini-menus that it can be a little hard to locate exactly the one you're looking for on the first try. You'll also find that it takes a fair bit of scrolling to get to some of the lower options. It would have been nice to see the menus sub-divided a little more, as seen in Canon's DSLR lines.

It takes a little intuition to find the Wi-Fi settings for the first time, doing so requires you to switch to playback mode, which isn't instantly apparent. Once you get there, set-up is quick and relatively painless however and allows you to quickly name the camera and connect to a local network. It's a quick and easy process to connect to a mobile device on the same network in order to view and transfer image. Connecting to a device with GPS also allows you to tag images with location information while the two remain linked. Although thumbnails render quickly, it can take a little longer than we'd like to load full size previews.

In what is a pretty clear concession towards keeping size down, the flash has no automatic pop up and upon switching the flash on, you'll receive an on-screen reminder to raise it yourself. The mechanism itself is solidly constructed though and it requires very little force to raise the flash; it's entirely possible to do so with your index finger while holding the camera one handed. It lowers just as easily with a satisfying snap.