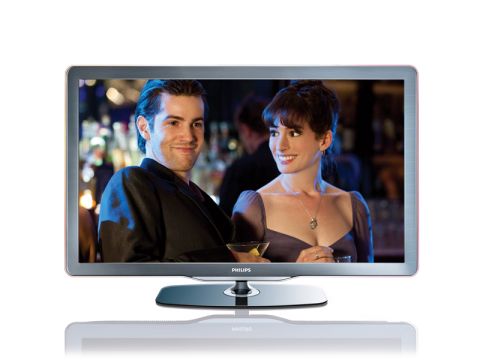 The 32PFL7605H offers really good value for money, only falling marginally short of top marks. Ideal for someone after a quality second room set.

Conventional (CCFL) LCD will be extinct by the end of 2011 at this rate. Philips' 32PFL7605H is the latest in a procession of startlingly affordable, relatively small edge LED TVs and its diode-driven backlight delivers benefits ranging from its super-svelte chassis through to enhanced picture quality.

The pleasingly extensive features include Ambilight, open internet access and Pixel Precise HD processing and there is a high degree of multimedia support, with all sorts of video, photo and music files being playable via either USB storage devices or DLNA PCs. You can make the TV Wi-Fi ready, too, if you add an optional USB adaptor.

The feature count isn't totally comprehensive, though, as the set sports neither 3D support nor a Freeview HD tuner. The former omission is entirely forgivable on a £620 edge LED set, but the missing HD TV tuner is harder to stomach, although this is a flaw common to every set in the current lineup.

The 8000 series above the PFL7605H adds 3D playback via a bundled pack and introduces the more powerful Perfect Pixel HD video processor. If money's no object, meanwhile, the 9000 Series, with direct LED lighting and superior 3D capabilities (except on the 32-inch model), is well worth investigating.