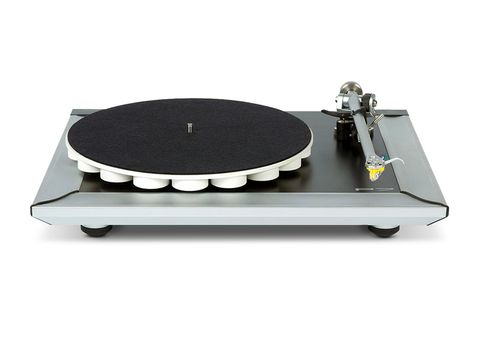 In so many respects the P7 turntable is a classic Rega, but it actually shares very few components with the famous old Planar models.

It has an AC motor mounted directly behind the bearing, but it's a low-voltage motor powered from an external generator, which also allows electronic speed switching. It has a short belt drive to the sub-platter, but there is actually a pair of round-section belts and the sub-platter is metal.

There's a hard, rigid platter with a felt mat, but instead of the original glass this one is made of ceramic, complete with Michell-style underslung weights around the periphery.

We have mixed feelings about this platter recipe: sure, it's dimensionally stable second to none, but the hardness is not relevant when there's a felt mat in the way.

The chassis is still particle board, with a metal trim, which serves both visual and functional purposes, helping to damp and disperse resonances in the chassis.

The arm on the P7 is the RB700. Here the inheritance from the classic RB300 is even clearer and many of the parts are identical or, at least, identical in measurements. There are various changes, though perhaps most significantly in the method of mounting: this arm mounts via three screws through holes in the stainless steel base plate, rather than the single large-diameter nut of the older models.

The arm tube is given a special coating. There's a third hole in the headshell for cartridges that take a third bolt (including Rega's, of course). In common with the RB300, the counterweight is made of tungsten and is intended to be adjusted for perfect balance, downforce then being applied by a calibrated spring.

Most arms rely on moving the counterweight to set downforce, but a spring has the advantage of slightly increasing downforce as the arm rides up over a warp, making for more secure tracking of warped discs.

One of the occasionally amusing results of blind listening is that products, apparently from diametrically opposed schools of thought, emerge as sounding quite similar and few would have expected a Rega to receive many similar comments to the Pro-Ject Xperience.

That's what happened, though, with one listener even pointing out the similarity directly. It was felt in general that the P7 had the edge in control and resolution and also integrated the bass better with the mid and treble, but its imaging and general presentation were thought quite a lot like those of the Pro-Ject.

In keeping with the traditions of the brand, a good rocking performance is invariably on offer with any disc of decent merit. In fact it's interesting how Rega has managed to keep that aspect intact from its earliest models, perhaps very slightly lessening the raw impact and at the same time adding more insight and better tonal balance.

Effectively, if you always enjoyed the Rega sound, this could be just the deck for you!