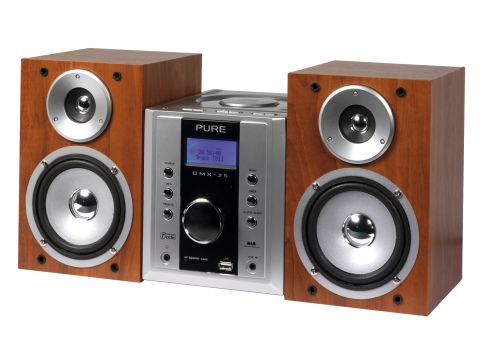 This isn't hi-fi. After a succession of tabletop DAB radios, British audio brand Pure has started concentrating on mini systems with built-in DAB and much more besides.

It's a shame that the main unit's build quality leaves something to be desired. Grey and boring, it's a wonder that the makers of DAB radios haven't caught-on to the crazy new colour scheme sweeping the consumer electronics industry - glossy black.

Instead, we're left with a black plastic panel in the centre holding not just a blue LCD screen, but also an oversize volume knob, and the infrared sensor.

At least the rosewood speakers turn out to be rather good, despite their tacky (but thankfully, removable) speaker grilles. The line-up of inputs also impresses and promise much versatility, able to connect up with seven sources.

As well as a CD player that also can spin 'rip and burn' discs - and even display track names on the black-on-blue LCD screen - the DMX-25 can play MP3s or WMA files stored on a flash-based USB stick or a SD memory card. Both inputs are on the front of the player. Unlike its more expensive cousin, the DMX-60, you're unable to record from DAB radio onto an SD card, however.

There's also a line-in for connecting an iPod and around the back is also another line input, ideal for connecting a computer. The DMX-25 is a wonderful solution for a desktop, especially one belonging to an internet-savvy music fan.

Sound quality is reasonable, with impressive warmth with acoustic music and speech radio. It may lack audiophile-grade clarity and it's best not to expect too much from those speakers, but sat at either end of a large desk the soundstage enjoys reasonably impressive stereo from some very neat-sized speakers.

Happily, programming the DMX-25 is a breeze, with all DAB stations tuning in while scanning between them is an intuitive experience. There's no possibility of recording DAB radio, but this is still a product that dips its toe into the future of music.

Using that USB input is a breeze. In our test using a 1GB stick, it managed to find - in amongst various files and folders - an MP3 file of Bjork's Play Dead copied from a Mac computer. Although it, ahem, played dead at first and merely displayed 'bad media' on the LED display, on the second try it found the MP3 immediately and showed track length in seconds - and even the title - before playing it with good sound quality.

The SD card slot has a similar skill. Slip in a card of any size - our test sample was a 1GB card from Kingston - and toggle between tracks using toploaded controls.

Chuck in a decent remote control and you've found a DAB system that's low on wow factor, but high on functionality.

Considering the low price, Pure has managed to produce a budget system with more bells and whistles than you've a right to expect.