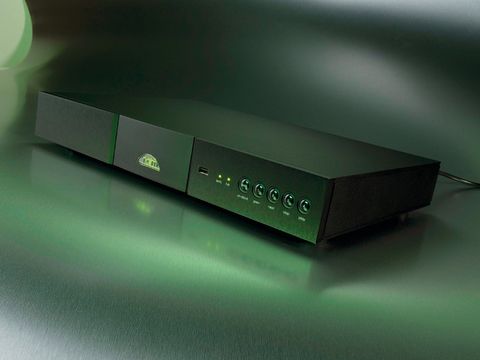 The Naim Audio DAC is quite simply one of the most capable machines we have had the pleasure of auditioning. Go and give it a try!

The Naim DAC offers exemplary levels of performance in terms of both its hi-fi presentation and its musical fluency from a wide range of sources thanks to its sensitive use of highly advanced – and frequently proprietary – technology.

Some 20 years after the first stand-alone DAC – the Arcam Black Box – appeared, Naim Audio has finally joined other manufacturers at the party.

For years, the company ignored external DACs completely, but with today's proliferation of digital media and music that does not come stored on silver discs, it is no longer an option. The DAC is fast becoming a must-have component in any contemporary hi-fi system.

The price of the Naim DAC pitches it well above budget favourites such as the cambridge Audio DACMagic, but comfortably below the high-end Chord Indigo DAC/preamp. So, in price terms, it sits in the middle ground, along with the likes of the Bryston BDA-1. But where does it stand in terms of performance?

The Naim DAC's biggest claim to fame is that it promises to deliver zero jitter through its S/PDIF inputs. Let us, however, just clarify that for the sake of any pedants: Naim says that the DAC adds no jitter to the signal coming through those inputs.

Any jitter that was present in the original production of the music – and there is nearly always some – will still be there so Naim cannot truthfully describe the DAC as zero jitter. No DAC can deliver that!

This zero-added-jitter is achieved by passing the incoming signal to, what Naim describes as a rotating data RAM buffer, independent of its timing information.

The signal data is subsequently read out of the buffer having been re-clocked by one of ten ultra-low noise, fixed frequency oscillators selected to match best the average incoming clock frequency and then send it through a SHARC DSP digital filter, running Naim-written code, which oversamples – or up-samples – the data (16-times on a 44.1khz sampled signal.)

This ensures that the signal entering the dual mono, 24-bit, Burr-Brown PCM1704K DAC chips – as used in Naim's top-of-the-range CD555 CD player – is completely isolated from any incoming S/PDIF jitter.

As usual with any Naim design, great – some might say obsessive – attention has been focused on the power supply arrangements and upon keeping mechanical interference at bay. At several points in the design these considerations meet.

The main power supply capacitors, for example, are removed to their own separate circuit board because they can vibrate when charging up – a mechanical disturbance can cause problems if it reaches other components.

We tested the DAC within the context of a Naim system, but it is important to note that it can just as easily be used in any other manufacturer's set-ups. Make sure, however, that you feed it with the best sources, if you want to exploit its full potential. for example, we used it with an iPod Touch and the performance was exceptionally good for an iPod.

That said, making a purse out of a sow's ear is beyond any DAC we have yet encountered, the Naim included. And that's not being rude about the iPod, the performance of which was very credible, but nonetheless wanting in comparison to genuine high-end sources.

We found it simply lacked the dynamic edge required to elevate it above the status of hotel lobby music.

The Naim DAC comes with eight S/PDIF inputs through BNC, RCA and TOSlink connections, has two USB ports and can process hi-resolution audio data files up to 32-bit/768khz (although these will need to be on top-notch USB sticks). The S/PDIF inputs are all isolating and work up to 24-bit/192khz.

The DAC is also, naturally, power-supply upgradeable. To augment the integral supply of the DAC, we took advantage of this by using the XPS that formerly powered the analogue stages of an HDX hard-disk player.

This provides a worthwhile lift to its already dramatically impressive performance, and is well worth doing if you find yourself with an otherwise redundant XPS... or you have £2,850 burning a hole in your pocket with which to buy one.

All of Naim's fanatical attention to detail pays dividends here: that much is obvious from the moment the DAC starts doing its job. Its performance is clearly in another league to anything we've heard before.

Music emerges with startling clarity and amazing levels of detail, while timing is absolutely on the button. In fact, you had better prepare yourself for a real surprise if you do not associate stereo niceties with Naim, because the DAC does sound-staging, timbre, spaciousness and all that high-end audiophile stuff as well.

Given suitable material and an appropriate source – in this instance an HDX hard-disk player – its performance can be breathtaking: listening to experimental-metal tracks from the System of a Down album, Mezmerize, we notice that the DAC not only renders the vocals with pristine clarity and intelligibility, but also presents Daron Malakian's guitar as producing clearly individual notes rather than the frenzied blur that other systems often deliver when he plays at full speed.

The music's timing – and the band delights in playing about with rhythm and tempo – is portrayed forcefully and precisely, but there's also a great naturalness and feeling evident that counters any notions of metronomic sterility.

Of course, this DAC would not be worthy of carrying the Naim logo if it could not connect the listener with the emotional aspects of a performance. it does not disappoint in this respect... and we suspect that much of its communicative ability comes courtesy of its extreme clarity and resolution.

We listened to AC/Dc's Rock & Roll Ain't Noise Pollution and the way that the band's timing and interplay came across was sublime. Drums and bass are clearly differentiated and provide a thrilling sense of the track's changing impetus even when listening at wholly inappropriate levels, ie far too gently.

At a more respectable volume setting, the sound of air moving when the kick drum is pedalled has timbre, definition and credulity that brought a smile to our faces. The drum is tight and crisp even though it's playing at chest-pummelling, dance-floor levels. how admirable!

Moving to the classical end of the spectrum gives the DAC a chance to demonstrate its high-end stereo capabilities. Its success here seems attributable predominantly to its dynamic control, which enables it to portray instruments with stunning fidelity.

A gently blown flute, for example, sounds simultaneously delicate, yet has sufficient substance to appear wholly believable. Vigorously beaten timpani explode from the rear of the soundstage, yet retain their subtle harmonic overtones, which reinforces the credibility of their presentation. What is more, these instruments emerge from a fastidiously sculpted, three-dimensional, richly detailed acoustic space, which, when there is no signal, can be eerily silent.

This assumes, of course, that the recording is free from noise. No matter what genre of music you play, though, you will quickly discover that the Naim DAC presents the frequency extremes quite unlike any other component you might have heard.

The bass has weight, speed and authority quite beyond comparison in our experience. Low frequencies exhibit exceptional power, extension and control, along with an analogue-like warmth and substantial feel that even vinyl cannot match.

In truth, even the finest vinyl replay would struggle to hold a candle to that of the DAC at low frequencies.

Similarly, at the top end, the DAC is vibrant and revealing, but it never sounds brittle or harsh and its midband is as open as one could wish to hear.

Put aside your feelings and preconceptions about 'the Naim sound'. Should you be looking for a versatile DAC you are doing yourself no favours if you do not, at the very least, audition this extraordinarily capable machine.