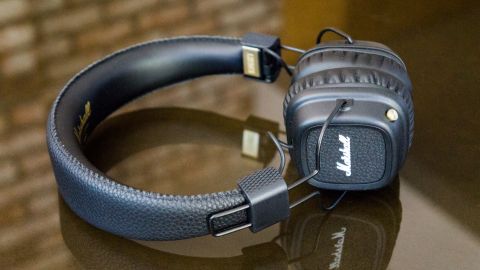 Marshall has maintained the Major II's fun, bass-heavy sound signature in its wireless version, but its plastic build and noisy Bluetooth stop it from reaching the pinnacle of the audio equipment manufacturer's career.

You may know Marshall for its guitar amplifiers, often used on stage by rock stars and amateurs alike, but the company does way more than just amps. In the past few years, Marshall's produced several lines of headphones, a Bluetooth speaker or two and even a smartphone.

Marshall's headphones have been universally solid offerings that target the fashion-conscious more than the audiophile. Its latest offering, the Marshall Major II Bluetooth, is the company's first wireless headphones and it continues Marshall's trend for focusing on fashion and fun rather than pristine sound quality and a great build.

The Marshall Major II Bluetooth are simply a wireless version of the Major II ... which may be disappointing to fans looking for sound and build quality improvements over the original. There's a $30 (£50, about AU$18) difference between the wired and wireless Marshall Major II versions which, in my experience with the category, isn't too much to pay to go cordless.

As a package though, the Marshall Major II Bluetooth are an undeniably attractive product with its fun, bass-heavy sound and retro styling. But its plastic build and sound quality leave something to be desired.

You'll either love or hate the styling of the Marshall Major II Bluetooth. It retains the exact same styling as its wired counterpart – both which is modelled after Marshall's iconic amplifiers. Its combination of black and gold isn't exactly subtle, but it's also not shouting for attention either.

The Marshall Major II Bluetooth is made entirely of rubber and plastic, though there are some gold metal flourishes like the control joystick located on the left earcup and the gold "Left" and "Right" labels on the headband. The earcups and adjustment sliders are made of plastic too, which doesn't inspire confidence. There have been reports of users snapping plastic adjustment sliders with the original Major II and it appears Marshall hasn't yet addressed the issue here.

The headphones are padded with soft leather on the earcups and headband, making them comfortable for the most part though I experienced some pain from the headphone's pressure on my ears after long listening sessions.

Included with the Marshall Major II Bluetooth is an excellent headphone cable for when your battery dies. It's a hybrid straight and coiled cable, featuring a short coiled section that gives you extra slack when plugged in. I expected the coils to add a lot of weight but was pleasantly surprised by how imperceptibly heavier the headphones became after plugging them in.

The Marshall Major II Bluetooth are relatively basic wireless headphones, offering only a wireless connection, mic and control stick. You won't find noise cancelling or multiple device pairing like you will with more expensive wireless headphones like the Plantronics Backbeat Sense. However, these headphones are bit cheaper than Plantronics', coming in at $150 (£129, about AU$197).

The gold adjustment knob located on the side of one of the earcups is quite useful, allowing you to answer and reject calls and pause, play or skip music. One feature Marshal's headphones are lacking, however, is the ability to trigger Siri or Google Now. It's a little disappointing, but not something that I would consider a dealbreaker.

In terms of sound, the Marshall Major II Bluetooth is nearly identical to its wired sibling. There's a slightly bigger mid-bass bump that hits you over the head when playing back some songs, though this might be a plus for some people.

The Major II Bluetooth sounds the best playing back rap and electronic music where the mid-bass hump makes for a fun and exciting listening experience. Audiophiles won't love the imbalanced sound but the Marshall Major II Bluetooth are undeniably fun.

Ironically, it's this mid-bass emphasis that makes the Marshall Major II Bluetooth less than ideal for playing rock music, a genre where its guitar amps are frequently used. The bass simply overwhelms, drowning out cymbals and guitars.

That said, don't even think of getting these headphones if you like listening to classical or instrumental music, as you'll be left with rolled off highs that make violins and cymbals sound dull and lifeless. More discerning listeners should check out the Jabra Move Wireless and JBL Synchros E40BT, both of which offer more balanced sound than the Marshall.

Another area where the Marshall Major II Bluetooth lacks is soundstaging. The headphones concentrate the sound inside your head instead of projecting outward. It won't give audiophiles the 3D audio experience of other headphones, but again, these are relatively affordable wireless headphones that perform moderately well within their price class.

If you're looking for a positive, one area where the Marshall Major II Bluetooth blows away the competition is battery life. Marshall claims that the Major II Bluetooth can achieve 30 hours of playback and, over the week I spent with them, I struggled to drain the headphone's battery.

This is great for people who don't want to charge their headphones every day or travelers who don't always have access to a proper wall outlet. Charging the headphones from dead takes about an hour, which is slightly above average.

One interesting feature of the Major II Bluetooth is the ability to share music with a friend by having him or her plug their headphones into the Major II's 3.5 mm headphone jack. Volume for both listeners is controlled via the Major II, however, so it's probably best to share it with someone who shares the same volume preferences you do. It's probably particularly interesting for families, as it's especially useful for watching movies with someone on a plane.

While the Major II Bluetooth won't appeal to everyone's fashion and musical senses, it offers a great package for those looking for a fun-sounding and long-lasting pair of wireless headphones.

The Major II Bluetooth produces overbearing bass on some tracks and its plastic build quality doesn't inspire much confidence, especially when they're meant to be portable.

Audiophiles should look elsewhere but rap and electronic fans will enjoy the sound.