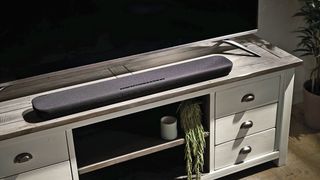 If you're in the market for a soundbar to add some oomph to your TV's audio output, Yamaha has two new models for your consideration: the YAS-109 and YAS-209.

The headline feature is their integrated Alexa voice control, so you can use your voice to adjust the volume, find out what the weather's going to do, and queue up some tunes if your television is switched off.

These soundbars also work with Spotify Connect, which means you can beam your Spotify playlists to them from the mobile or desktop apps.

Yamaha says it's worked with the Alexa team at Amazon to best position the microphones in the YAS-109 and YAS-209. Music or movies will automatically dip in volume when you're trying to chat to Alexa, which can be activated via the remote as well.

You get HDMI input and output sockets, supporting 4K HDR video and CEC control (so you'll be able to adjust the volume using your existing remote). Bluetooth is included too to give you another option for piping audio across.

The YAS-209 is the more premium soundbar of the pair, coming with a separate wireless subwoofer for some deeper bass sounds, while the YAS-109 features built-in subwoofers. Yamaha is promising "a life-like, 3D sound field that envelops you in sound", but we'll have to test them ourselves to reach our own verdict.

We don't have official prices or launch dates for Australia yet, but a rough currency conversion gives AU$350 for the YAS-109 and AU$510 for the YAS-209.