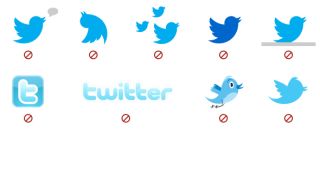 Take note: this is what not to do

Bird brain – Twitter has redesigned its little bird avatar and to some people's DISGUST the bird's little quiff has gone. Other people think it's fine, while yet more don't care at all. Have your say over at www.itsjustalogowhydoyoucare.tumblr.com [Twitter]

Big bird - Along with its new ornithological look, Twitter has released some trademark guidelines that say you simply cannot and should not modify the bird in any fun way whatsoever. Or else. Now, please welcome to the stage some people who are braver than we: New Statesman. @subcide. @subotnick. [Twitter]

Birds and bees – A brave young Englishman journeyed to E3 to interview Snoop Dogg and create video gold. There's gaming nostalgia. There's rapping. There's cringing. There's a question mark over whether or not Snoop actually knows how to rhyme. There is no better gaming interview. [Eurogamer]

Birds' eye view – Google's Street View cars have driven 5 million unique miles between them. That's, like, 1,000 times more miles than you'd need to walk to fall down at some girl's door. [Engadget]

The Birds – Samsung's ChatON IM service is now available on Windows Phone, so you can indulge in a spot of cross-platform chat with pals on bada, Android, BlackBerry, iOS and PC. Wait, do you hear that? Sounds a bit like keyboard keys hammering out a frantic message. It's very faint but if you listen hard enough we think it's… yes, it is, it's BBM's death rattle. [SammyHub]

Smile for the birdie – An interesting analysis of research that showed 36% of parents think their kids had become more aggressive due to video games. Shock of shocks, there are lots of holes in the research. [Guardian]

Birdball – Liverpool FC has a new outfit apparently made using an innovative antimicrobial fabric made from coffee grounds. It's called Scafe and is 'fast drying, assists with odour control and provides UV protection'. But mainly it's made of coffee grounds. Look how happy these men are about it! [Warrior Sports]

The Byrds – Oracle has been ordered to pay Google's court costs after it lost out for a third time after a judge found that Google hadn't infringed on Oracle's patents for a third time. Third time lucky? Not so much. [Android Guys]

Birds eye potato waffles – If OMT hadn't been a daily look at 10 random vaguely tech-related stories, it would probably have pursued a career as a booth babe. Its seems easy and OMT looks good in heels. Anyway, here's a look at what it's like to be a booth babe. Can't be bothered with all those words? The days are long, your feet hurt, you have to smile a lot, men are sexist, gadgets are dull. [IT World]