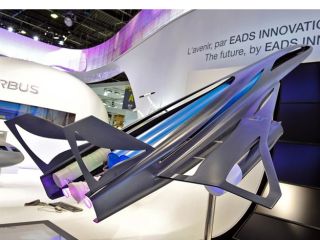 A new super speed aeroplane concept is to be unveiled today, which claims 'hypersonic' speeds that could get you from Paris to New York in three and a half hours running on a seaweed-based fuel.

Dubbed ZEHST (Zero Emission Hypersonic Transportation), the project aims to produce a jet, codenamed ZEHRA, that will reach speeds of 3,125mph and cruise just above the Earth's atmosphere, around 20 miles up.

All this, and it aims to be emission free by opting for biofuel, hydrogen and water rather than aerospace's current tipple of choice, kerosene.

Don't get too excited though; EADS, the company behind the jet, doesn't anticipate commercial flights getting going until 2050, at which point they'll set you back a pretty packet.

EADS has had its hypersonic jet in the works for five years already, intending the ZEHST project to be a successor to the much-missed Concorde.

The plans echo those of Sir Richard Branson, who recently told TechRadar that his Virgin Galactic space programme could also have major implications for Earth-bound travel.

He reckoned that transcontinental travel times could be slashed using similar technology, suggesting that London to Australia could take as little as two-and-a-half hours.