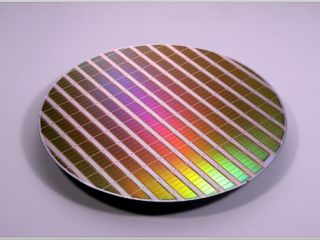 Samsung has announced that it's developed the world's first 64 Gigabit (Gb) multi level cell NAND flash memory chip. It's the eighth consecutive year that the density of flash memory has doubled, a feat that bodes well for portable devices like laptops and iPods.

By sandwiching together 16 of the new cells, Samsung says a 128GB memory card is now possible.

Currently, the capacity limitations of flash memory have hampered notebook manufacturers who want to use the technology instead of traditional hard discs. And one of the biggest criticisms of the current iPod touch is that 16GB-worth of storage just isn't enough.

Samsung's new chips could be the first step towards changing all that. Samsung says a maximum of sixteen of its 30nm flash devices can be combined. The result would be a 128GB memory card that could store 80 DVD resolution movies or 32,000 MP3 music files.

A 128GB card would also be big enough to replace the HDD in a notebook. Apple was linked with so-called Solid State Drives earlier this year. SSDs are not only lighter and faster than hard drives but they consume less power and are also considerably more robust as they have no moving parts.

These 128GB memory cards are likely to be very expensive, so the death knell isn't quite sounding on the traditional hard drive just yet.

Samsung expects to begin production of 30nm-class 64Gb flash devices in 2009. And according to Gartner Dataquest, the accumulated sales for 64Gb NAND flash and higher density devices could reach up to $20 billion by 2011.

By the end of 2009, iSuppli has predicted that 28 per cent of ultra-portable PCs will use some form of flash memory for storage.