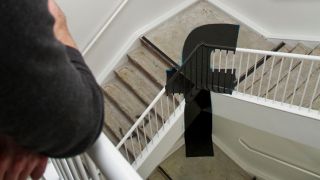 Facebook recently rolled out a feature called "Find Friends Nearby," which allowed users on mobile devices to find other users in their immediate vicinity, before immediately un-rolling it.

The feature was available for a brief time to mobile Facebook users through iOS and Android apps and Facebook's mobile website before being removed.

TechRadar reached out to Facebook for comment, though reports indicate that the feature was made available simply as a test, and that Find Friends Nearby won't necessarily be made official any time soon.

"This wasn't a formal release," a Facebook spokesperson said in a published report, "this was just something that a few engineers were testing. With all tests, some get released as full products, others don't. Nothing more to say on this for now, but we'll communicate to everyone when there is something to say."

Facebook's Find Friends Nearby feature could manifest as an effort to expand Facebook's mobile offerings in light of the social networking company's recent disappointing debut on Wall Street.

But its ability to locate nearby users regardless of whether they're "friends," despite similar functionality already existing in other location-based apps, raises some privacy concerns, said one expert.

"Consumers don't expect anything like this, and they never expected it when [Facebook] started. The whole premise of the service was controlled information," he continued, adding that being able to "share with some people and not share with others" is important.

"That seems to upend the whole premise of the social network."

Indeed, interactions on Facebook are typically limited between users who aren't friends, and it's doubtful the Find Friends Nearby feature would be any different.

In other words, "they'd have to just make sure that everybody involved in it opted in," Pasquale concluded, rather than having the feature on by default.

Born of a 'hackathon'

Facebook's Find Friends Nearby feature was reportedly born of a "hackathon" encouraged by the company itself, according to Facebook software engineer Ryan Patterson.

He said in a comment that the feature is meant to help people who've just met find one another by opening the Find Friends Nearby page from their mobile devices, as opposed to doing a search on one another's names, which can be unreliable.

It's certainly convenient, but even with the ability to determine when Find Friends Nearby can detect you, surprise invasions of privacy are always a possibility when technology like this is made available.

TechRadar asked Facebook to comment on these concerns, and this story will be updated if the company responds.