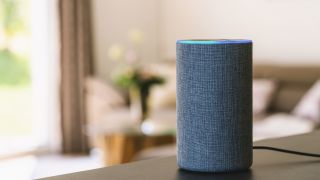 Have you spoken to a gadget today? There’s a good chance that have, with the number of voice-activated smart speakers and AI tasks rapidly growing as manufacturers and developers seek to cash in on the popularity of voice assistants like Alexa. When you can control gadgets, summon your favorite tunes, get a weather forecast and more simply by uttering a few words, why wouldn’t you?

But when it comes to the news, especially in a media landscape in which there are growing  concerns about misinformation in the form of ‘fake news’ – and with fact-checking processes by Facebook falling into disrepute – there’s an ongoing debate about what impact the increasing use of voice interfaces to access news will have.

While Siri was perhaps the first well-known voice assistant – and provided the inspiration for Spike Jonze’s Oscar-winning movie Her – Siri’s successors, Alexa and Google Assistant, have proved far more popular for and capable of delivering the news at our command.

In October, we saw BBC News launch an Alexa-specific news service in a bid to engage with listeners through the popular voice assistant, with a mix of dedicated reporting and repurposed information from the BBC’s other editorial channels. (If you want to try it, just ask Alexa, “Give me BBC News”.)

To get our head around how voice search is changing the way news is accessed and distributed, and the possible consequences, we reached out to a number of figures working at the heart of digital news production and distribution.

Making the most of voice search

We spoke to Mukul Devichand, executive editor at BBC Voice + AI, about the reasoning behind the British broadcaster’s dedicated Alexa news service, and what it meant for the dissemination of news in the future.

“Our journey has just begun on this,” said Devichand, calling the current Alexa service “the first iteration” in a much larger roadmap. “It’s pretty clear to me as a long-time producer and editor, that the way we tell stories should be revisited with each great shift in the internet.

“The growth of AI assistants has the potential to significantly disrupt the way we get information. Assistants offer an obvious and easy way to ask questions, which could be really transformative. What’s easier than just saying ‘tell me what’s going on’, or ‘did Brexit happen yet’, or ‘did Arsenal win the game,’ or ‘I don’t really understand why there’s a war in Syria’, to an assistant? So we may end up doing that instead of just tapping our phones.”

With smart speakers becoming fixtures in millions of homes worldwide, it’s imperative that news broadcasters cater to the new medium, in the same way they’ve adapted to scrolling news feeds and a generation accustomed to getting updates on demand through Twitter, Facebook, and Google News on their smartphones, rather than from the scheduled TV bulletins the BBC and other major broadcasters around the globe built their reputations on.

Devichand also acknowledges the changes and challenges that come with new methods of accessing information, suggesting that people today have an “expectation of 24/7 currency, and a genuine desire for interaction and depth on demand – with a great deal of confusion and mistrust given the way news is manipulated online”.

Why mistrust? “When algorithms or AI guide us to pieces of content, the dangers of misinformation, echo chambers and a polarized society are very real and present,” he explains.

Fake news is a big concern these days, whether it’s outright lies being thoughtlessly retweeted or news outlets distorting facts for the sake of a good story that readers will click on – with Facebook’s laid-back attitude towards misleading political ads proving highly controversial in the run-up to another election.

The danger with voice search specifically is that, given the short and digestible snippets that Alexa and other smart assistants tend to provide, users could be getting an incomplete or overly simplistic picture of the day’s events, and perhaps seeing just one side of the story.

We talked to Matilde Giglio, an investor at venture capital firm Hambro Perks and a founder of Compass News, a news aggregation service that was founded with the aim of breaking news readers out of the echo chamber. Giglio sees voice search as a natural way of accessing news, even if it tends to take information out of its original context.

“Voice is seen rightly by publishers as a great opportunity to reach demographics that don't always tune into the news,” says Giglio. “The podcast boom shows how people love audio. Young people especially are turning away from mainstream sources, and they love the on-demand nature of voice that fits in with their daily routines.

“But publishers fear that they are losing control over their content when it's repackaged or curated to suit voice on demand, as with Alexa. The content also becomes separated from the publisher's own platform, and their brand risks becoming diluted.”

Giglio thinks there are opportunities for voice assistant developers to gain the trust of publishers, and the BBC News Alexa service may well be the start of a healthier relationship between news sources and the companies distributing their content.

BBC Voice + AI’s Mukul Devichand certainly thinks so, arguing that the service is a way to channel users back towards a trusted news platform, rather than giving them more leeway to dismiss sections of coverage:

“There’s been some comment since we launched the service, saying it could perpetuate echo chambers by giving people more control, but in fact it’s the opposite here – once they ask ‘Give Me BBC News’ they remain within a BBC experience that aims to be impartial and wide-ranging, and that’s the difference.”

Convenience at all costs

As much as we value the convenience of a voice-based interface, or the immediacy of content funneled to us through various online channels, the ease with which we can share and receive information is the biggest obstacle to quality assurance, or basic fact-checking of what we hear and read.

Devichand speaks of the appeal of “conversational AI”, and some broadcasters and outlets may be taking steps in the right direction by gaining control of their editorial presence. However, if we’re more interested in the convenience of having a conversation with AI than it being an accurate one, that may make getting the truth into our homes increasingly harder.