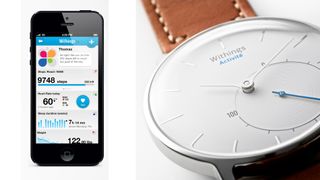 The Withings Health Mate Android app has been updated, and now features the company's Activité and Activité Pop smartwatches. However, you still can't actually use either device with an Android phone.

Withings has said Android compatibility will arrive by the end of February. In other words, it should be here no later than Saturday.

Click on the Activité or Activité Pop in the devices list on the app and you'll see a description of each, along with a link saying 'I want one!' This takes you to the product page on the Withings website which tells you more about each device. But it won't actually sell you either.

The Activité Pop went on sale on January 26 through the Withings website, and – for four weeks only, according to the Withings blog – from Currys/PC World.

Though as we say, the Withings website currently doesn't sell either. The Activité Pop is available on the Currys/PC World website though, despite the four-week time period having elapsed.

It's possible Withings is holding back until the European launch on March 3. Fingers crossed it will have added Android compatibility by then.

Both the Activité and Activité Pop have the same skill set of activity monitoring and sleep tracking. The Activité is the higher-end model, with scratch-proof domed sapphire glass and water-resistant stainless steel case, along with a stitched calf leather strap.

The Pop, meanwhile, has a PVD-coated case and silicone strap. But it's still very easy on the eye.

Both have been making waves in the smartwatch world since they were first unveiled. Unlike most, which have overcrowded fascias, they feature a simple dial which tells you how close you are to reaching your activity goal for the day. Come midnight, it resets itself.