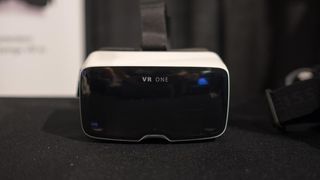 At the rate virtual reality is going, every company will have its own headset. Tons of big names from Oculus VR, Sony and even Microsoft have gotten into the game, and now camera lens maker Zeiss has jumped into the ring. Zeiss claims it has put its knowhow behind molding precision glass to create one of the clearest VR headsets around.

At the same time, though, it's very simplistic in its design and function, lacking any controls whatsoever. In this way, it's much more closely resembles Google Cardboard. Both devices can hold different types of phones than just a Samsung Galaxy Note 4, and better yet, this headset won't get soggy in the rain either.

However, once again Zeiss' headset lacks any controls, including Cardboard's super basic magnetic volume nob. The VR One is also significantly more expensive than the $20 (about £15, AU$25) you'll spend to get a VR kit from Google.

Not much in looks

Externally, the Zeiss VR One looks a lot like a smaller, lighter Oculus Rift painted white, but on the inside it's got a lot less going on. You won't find any IR strobes on the outside shell, let alone a single switch and dial. Nope, this device is simply a specialized housing for your phone and two lenses that you strap to your face.

The VR One's simplicity comes as both a blessing and curse. On one hand, it's very lightweight and doesn't feel like it's weighing heavily on your face. On the other, the lack of controls on the frame mean you have to push your phone back out of the device to change anything from the volume level to picking a different app – a problem that the Samsung Gear VR solves with capacitive touch zones.

To start using the headset, you simply just need to set your phone into a plastic holding tray and slip it through a slot that spans the width of the device. Zeiss has specially made trays that work with the iPhone 6, Samsung Galaxy S4, S5, S6, Google's Nexus 5 and the LG G3.

A company representative also explained that users can also request 3D models for other handsets and 3D print themselves, so as long as the screen size is between 4.7- to 5.2-inches.

The biggest thing the VR One has going for it are the glass lenses Carl Zeiss has fashioned for this headset. The German company is legendary for manufacturing some of the best optics for camera lenses, and the two glass elements are just as high-quality.

The VR One's lenses magnify duplicated images off your smartphone with perfect clarity, save for the tiniest bit of distortion you'll only notice at the extreme corners of your vision.

On the other hand, these lenses might even be too perfect for their own good. Because the glass elements help to magnify the digital image so clearly, I was able to discern the individual pixels more easily than with any other headset I've tried thus far, including the Oculus Rift Crescent Bay.

On top of polygons breaking up into individual pixels, color shifting became especially apparent on the iPhone 6, with its resolution of 326 pixels per inch (ppi). This was less of a problem with the LG G3, though only thanks to its ludicrously crisp 538 ppi display.

Worse yet, almost all Zeiss's specially-made apps downscale video and content to nearly standard definition levels that just end up looking even worse up close. Sure there's a VR Media app that lets you convert any onboard media, and those you took with the camera, into a VR experience – but it looks just plain bad.

The only app that looked passable was a zombie shooter game, in which you would aim a revolver with your gaze. The game also created a believable sense of depth, though not to a great enough extent that I felt like it was immersive.

The Zeiss VR One has been out since last October, but it doesn't feel like an experience that's ready for prime time. Priced at $129 (about £82, AU$167), it's a bit expensive for what is essentially is a plastic version of Google Cardboard with better lenses.

What's even more unforgivable is the lack of quality media for this device. In my short time with the headset, I only found one game to cut the mustard and solely because it did not look like a pixelated mess.

With a bit more time with the device, I might change my tune. For now, I feel the Samsung Gear VR would be a much better choice for most early adopters.