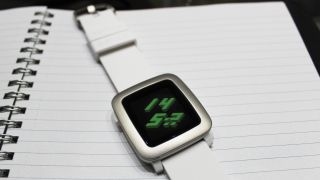 Pebble isn't best pleased about what's happening with its Time app for iOS - it's still not available on the store despite being approved on May 18.

It means those who own a Pebble Time and use an iPhone can't currently use the wearable that shipped at the end of last month.

Pebble submitted a new updated app on May 22 with minor bug fixes but despite requesting "fast-track approval" it hasn't made its way onto the store yet.

Pebble took to its ever popular Kickstarter page to reveal how it believes Apple is obstructing the app. The company also considered adding Time support to the existing Pebble app but a new update for that has been waiting to be approved for 43 days and counting.

Pebble wrote, "The sooner we clear this obstruction, the sooner we can get back to updates about reward shipments, pre-order news and Pebble Time Steel."

The company want you to bring it to Apple and the internet's attention through Facebook and Twitter using the hashtag #FreeOurPebbleTime.

Apple has also just launched its own wearable in the form of the Watch - you can read our review here. We've reached out to Apple for comment on the Pebble issue but we've yet to receive a response.

If you're restricted with an Apple device Pebble recommends using a friend's Android device to set it up now – you'll find a full guide to it on the Kickstarter page.

If you've got an Android device you can download the Pebble Time Watch app from the Google Play Store now.