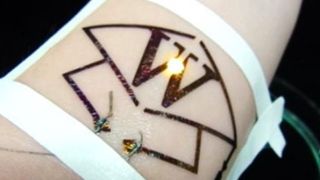 For several years now, researchers have been developing 'electronic tattoos' which sit on your skin and monitor your vital signs.

Making such a device can be tricky - it needs to be flexible, ultrathin, durable and to operate in a wide range of conditions. To become a commercial product, they also need to be cheap and simple to produce.

But now a team at Waseda University in Japan has figured out how to do all of those things on a household printer. They developed a new kind of elastomeric "nanosheet" film, which is 120 thinner than a human hair. As well as being thin, it's also flexible enough for comfortable use on the skin.

They also figured out how to hook up electronic components to it without the need to solder them in place. They developed conductive "wiring" that can be created on a household inkjet printer without the need for clean-room conditions.

Elements like chips and LEDs can simply be sandwiched between two nanosheets, rather than chemically bonded or glued into place - a process known, wonderfully, as "sandwich fixation".

To test their inventions, they built a digital tattoo and stuck it to some artificial skin, where it stayed in place and operating for several days.

It's hoped that digital tattoos of this sort could one day replace the bulky wearables we have today, as well as proving useful in the fields of medicine, healthcare and sports training.

The full details of the discoveries were published in the Journal of Materials Chemistry.