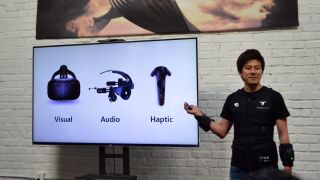 HTC Vive may be known as a gaming device, but HTC's vision for the virtual reality headset extends beyond this single vertical.

"I can say that's a core part of our mission," said Marc Metis, Global Head of Vive X at HTC Vive, about bringing the Vive to more sectors. "Enterprise, medical, education [are] really important to what we do as a company."

"There's more activity going on than might be publicly noted," Metis continued. "We're doing a tremendous amount of work in enterprise, doing work with top companies in the world, in automotive design, furniture, you name it. We've invested in companies in medical, we have active developments in education. We believe VR can change many different industries, and over time you'll see more and more of that publicly noted."

We spoke with Metis in the lead up to Vive X Demo Day, an event for 26 of the $100-million accelerator program's startups to pitch their tech to investors and demo their innovations. The event was held today in San Francisco.

These are early-stage efforts and most won't come to market any time soon, but they serve as a window into the various uses for Vive that Metis referred to as well as the whole of VR and AR.

"At Vive X you'll see the early stage companies that are on the cutting edge in each of these areas," Metis said. "[With Vive X] we have the ability to commercialize and scale these companies to help change these industries."

HTC started Vive X to expand the overall VR and AR ecosystem. It's open and agnostic, meaning companies can develop solutions for any hardware, no matter who makes it. This approach was on display at Demo Day, with startups showing programs running on Microsoft HoloLens, their own prototypes and speaking about developing for all platforms. Most, however, used HTC Vive.

The startups at Demo Day are part of Vive X's second batch receiving funding and support through the program. They consist of companies working on solutions for enterprise, social, medical and education, plus gaming.

ThermoReal's demo was particularly impressive; as you hold onto a six-inch-or-so node, the handle heats up or cools down depending on the scene or AR application you're looking at. Holding the phone over a picture of a house in flames made the temperature rise, while watching a video of a man jumping into a frozen lake caused it to get ice cold.

The speed at which the temperature changed also varied depending on the content. A car exploding would cause the handle to become instantly hot, and the man jumping into the frozen lake was more of a gradual chilling.

Location of the temperature variance also played a role in how you felt the sensation; you felt the heat intensify in certain parts of your hand as you watched a video of a lighter moving along someone else's extended hand.

To simulate pain, both hot and cold sensations occur at the same time. It wasn't so much painful as uncomfortable - not that we wanted to feel legitimate pain, but it wasn't as strong a sensation as those of hot and cold.

Other standouts were bHaptic, which uses several wearable accessories to provide haptic feedback, namely through the chest, back, forehead and forearms. Aurora AR is developing an augmented reality optics solution, one that provides a 135-degree field of view, works in daylight and will allow for less expensive AR headsets. Aurora AR plans to begin selling its product in November.

While there was some overlap among startups, they generally had a unique spin on a service or solution for VR or AR. Every one of them is seeking $1 million or more in funding, and some are further along than others, but each felt like tech that's very much within reach.

Metis highlighted some of the strategic verticals the Vive X batch two companies are working in, which are the same areas where HTC wants to Vive excel.

"Enterprise, education, commerce - areas we feel have been under served - those particular key verticals. Medical is another one," he said. "We see them being big multi-billion dollar verticals, and we’re on a mission to find companies in these key verticals. That’s a key focus for us."