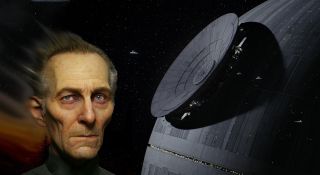 “I see dead people.” It’s one of the most famous lines in cinematic history, and something we’ll all soon be dragging up as a tired, repetitive joke whenever we leave the movie theater.

No, The Sixth Sense isn’t headed for an unwarranted remake, but visual effects are getting to the point where humans can be digitally recreated in such a way that they won’t shatter our all important suspension of disbelief whenever they pop up on screen.

We’re not just talking effects that will help current stars more realistically look like they’re performing dangerous stunts. Industry experts have suggested it will increasingly be used to bring deceased actors and actresses back from the VIP party in the sky and onto the big screen once again.

Ahead of Oscars weekend, we sat down with Simon Robinson, co-founder of The Foundry, the British software house whose creations have been used to craft special effects in every Academy Award Best Visual Effects nominee from the past six years, to discuss the changing face of visual effects, and, more importantly, the faces the technology is changing.

Facing the future of visual effects

Visual effects is a category that continues to transport and amaze audiences. While La La Land might be expected to walk away from this weekend’s Oscars with an armful of awards, it’s the likes of The Jungle Book and Kubo and the Two Strings, two of the Best Visual Effects nominees, that are changing the shape of cinema.

While big explosions (Deepwater Horizon) and mind-twisting distortions of reality (Doctor Strange), are also currently what it takes to get a VFX Oscars nod, according to Robinson, this won’t necessarily be the case for long.

“There’s a transition from visual effects being an in your face add on, to becoming more integrated in a valued way that allow people to communicate their vision more easily,” he told us.

“We are at a point now where VFX isn’t just an add-on for a movie, but is an integral part of any production.”

Although big budget VFX are now good enough to trick audiences into believing explosions, landscapes and even alien races are all the real thing, there’s still one area digital artists and movie makers are unable to master - the intricate nuances of the human face. This God-like leap into the future is the next step for Hollywood, however.

“The effect that still really stands out, is human faces, everything else has become extremely plausible now, to the point where most people can’t tell the difference,” Robinson explained.

“With human faces, there’s the underlying and continuing effort to improve how plausible they look, and how well they fit into the environment.

“All of these ideas are around maintaining the audience's sense that these things are real, and the moment you break it slightly for a current audience, you’ve lost them.”

According to Robinson, whose software has been used on Oscar winning films including Interstellar, Life of Pi and Ex Machina, these developments are just a stepping stone on the way the ultimate future - effects so life like, dead actors will be able to be brought back for new roles.

It might sound far-fetched, but raising the dead to complete film roles or even star in new ones, is something that’s already begun. One of this year’s Oscar nominees, Star Wars: Rogue One, even managed it, using CGI to revive Grand Moff Tarkin more than 20 years after actor Peter Cushing died.

“The element coming out of Rogue One, which got a lot of press, is the digital resurrection of Peter Cushing,” Robinson recalled.

“It’s pretty exciting. There’s so much around digital actors and motion capture and their representation that’s still to be explored, whether alive or deceased. It’s quite fascinating.”

Cushing isn’t the only case of bringing actors back from the dead. The technology has also been used to complete films where actors die during the production process. This was famously the case for Oliver Reed in Gladiator (pictured below) and, more recently, Paul Walker.

“We saw it with Fast and Furious 7 which had the requirements for unfortunate resurrection,” Robinson explained. “It’s becoming more pervasive, and it’ll be interesting to see to what extent it becomes important.”

Although there's a desire within the industry to use visual effects for these types of digital resurrections, currently the tech still lags behind the possibilities.

“Digital humans are incredibly hard to do,” Robinson explained. “Something like Peter Cushing is a prime example of what’s on the edge of what we’re capable of. We can’t yet do plausible human synthetics really well.

“If we follow this idea that film makers just want to be freed up to do whatever they imagine rather than whatever they’re constrained by in the real world, things like these production techniques and these digital actors allows people even greater freedom to achieve things that previously had not been seen or can’t really be done well in real life.”

It’s not just the tech that’s a roadblock to widespread digital resurrections. When actors’ reputations and legacies are on the line without their ability to give permission or sign off on rights, there’s also the topic of ethics to discuss.

Is it right to bring actors back from the dead?

Digital resurrections aren’t simply a question of possibility, but one of necessity too. Just because the technology allows it, that doesn’t always mean movie makers should utilise these skills to bring life back for passed actors.

As well as depriving new talent of opportunities, it brings all manner of moral and ethical questions to light. The late comedian Robin Williams (pictured below), for instance, went to great lengths to ensure his likeness would not be used after he passed away.

Fortunately this isn’t something that’s lost on the industry.

“The jury is out on how widespread this should become,” Robinson explained. “It is a technology and a moral maze the whole thing.”

Away from the legal storm surrounding who owns the digital rights to a dead actor’s work and who gets to approve or block their appearance in future films, there’s also the difficult question of whether this is something audiences really want.

“Peter Cushing is an interesting example because those of us who are old enough to worry about the original Star Wars and the legacy of actors and what their future digital rights might be, noticed it, but I’ve heard the younger audience didn’t care,” Robinson told us.

“They were sold on the vision of this character. They didn’t believe he was synthetic, they didn’t know who he was, and they didn’t care either.

“Rather than becoming something that’s implausible, very hard to do and never done, it becomes up to the audience to decide how much they want it. It’s very hard to predict where that goes, but it’s another tool in the arsenal.”

Although the big discussion points have surrounded the Star Wars universe, it’s not just Peter Cushing that’s called these technical and ethical questions into focus.

Having already made a surprise, digitally-remastered cameo in Rogue One as a young Princess Leia, since the sad passing of Carrie Fisher much light has been placed on how the franchise will address the actress’s death, and whether digital doubles will be generated to keep the character going.

This won’t be the most famed case of digital resurrection yet, however. Instead, Star Wars creators Lucasfilm has assured fans that it won’t taint Fisher’s memory, or that of such an iconic cinematic character by bodging a digital revival before the technology is truly there.

“We want to assure our fans that Lucasfilm has no plans to digitally recreate Carrie Fisher’s performance as Princess or General Leia Organa,” the studio said in an official statement shortly after her passing.

They added: “We are still hurting from her loss. We cherish her memory and legacy as Princess Leia, and will always strive to honor everything she gave to Star Wars.”

Where does the tech go next?

Just because Lucasfilm has opted not to use VFX-aided digital resurrection to keep Princess Leia going doesn’t mean the technology will stall. On the contrary, Robinson has predicted that it will continue to advance and evolve at a steady rate.

“We should see very incremental improvements there over time about how plausible it looks,” he said. “Gradual improvements over time will build on the shoulders of giants, and it’s an important part of progress.”

Worryingly, it won’t stop when virtual humans are passable as the real thing in precarious situations, either. The days of living, breathing actors could be numbered, at least according to those in the industry.

“There could be some bizarre, far off future where real actors and their faces aren’t needed any more because we can make synthetic ones that can better adhere to whatever mould we’re trying to create,” Robinson said.

“Maybe that would be a sad thing as I would like to think that human performance is a fundamental thing that we go to see movies for.”

The roadmap for visual effects is there though, and like progress in any industry, it’s unlikely to be stopped. While the likes of Emma Stone and Ryan Gosling might by vying for Oscars in 2017 then, there’s a chance that within a decade or two, long passed actors could be claiming Academy Awards of their own. Just maybe.